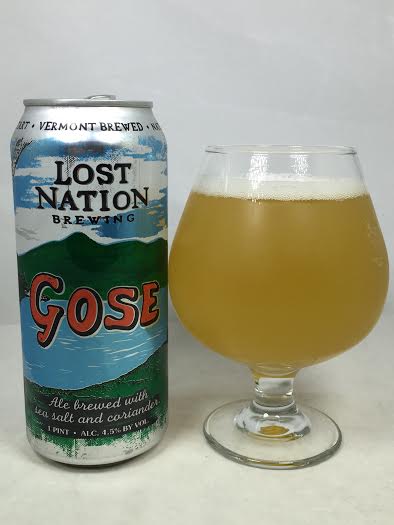 "A traditional German beer style that was all but extinct 30 years ago. An amazingly refreshing beer brewed with coriander and sea salt. The tart, dry finish combined with the hint of salt and citrus leaves your palate craving another sip."

Pours a hazy, murky light yellow with less than a finger of white head. It looks like a New England IPA.

It smells like salt water with seaweed and even some oysters. Some small fruity notes of lemon and an herbal quality (maybe the coriander) are here as well. Wheat and dough round things out.

The first wave of flavor is tart salt which is nowhere near as much of an overpowering ocean effect as it was on the aroma. This is good because I was fearing having to drink 16oz of sea water. The tartness also has the aforementioned lemon zest quality. Absent from the aroma, but here on the taste, are some tea leaves and fresh mint, which does go along with some of the herbaceous notes I got from the aroma. That salt water taste is back on the finish, but a bigger salt presence prevents it from being just a mouthful of the Atlantic. Some extra lemon and even some lime put a cap on this one.

Mouthfeel is light, but full. When held for a moment, a little bit of carbonation dances around the tongue, but otherwise it is relatively calm. It was surprisingly refreshing after a shaky start, but thanks to the lemon/lime finish, it had me reaching for another sip.

I am writing this review on the hottest day of the year (so far) and Lost Nation Gose is proving to be a welcome companion on such a warm day. I was skeptical after such a nautical aroma, but luckily the taste offered more than a day at the beach. It's a standard, easy-drinking, flavorful Gose that should pair well with the Summer months.