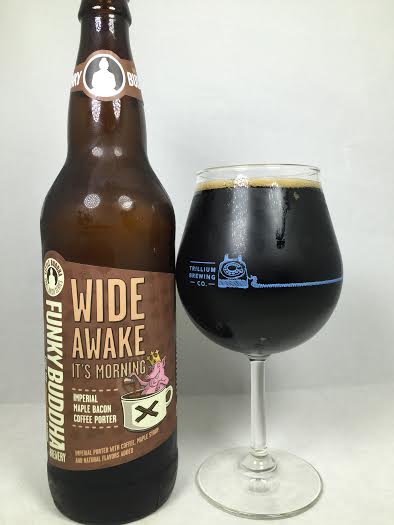 "Rise and shine, buttercup - it's time for breakfast. This imperial version of our infamous Maple Bacon Coffee Porter adds some girthy gravity to the the smokey, salty, rich combo of maple syrup, fresh roasted coffee, and bacon."

Pours nearly pitch black with just shades of ruby red and dark brown on the edges. An aggressive pour still only produced (maybe) half a finger of brown head.

Oh, man. That maple syrup is so sweet and in your face, but is also assisted with fresh coffee (iced coffee) and noticeable saltiness. Oddly enough, I'm also getting a freshly-made chocolate doughnut aroma to this too. Pretty much everything screams breakfast.

I must say that out of everything I experienced on the aroma, the salt appears to be the flavor that sticks out the most on the taste. I acquired two bottles of this in a trade and I had the same experience with my first bottle. I thought what I tasted was influenced by what I had eaten right before, but sitting down a second time after a completely different meal, the results are the same and I can safely that this is how the beer is meant to taste. I don't mean that in a bad way whatsoever, so hear me out.

I wouldn't compare the salt in this to the saltiness of a Gose, but instead it is similar to bacon (which is what they were going for) or even the smoked malts of a good Rauchbier. Like the aroma, the syrup is big and sweet. Would I say it is like fresh, Vermont maple syrup? Not exactly. Think more supermarket maple syrup, but not as artificial. The coffee was more like a creamy iced coffee on the aroma, but now has flipped to dark coffee grounds on the taste, which is more similar to a classic porter. Near the finish are more dark roasted malts, black coffee, and dark chocolate bitterness.

Mouthfeel is nice and thick with lingering salt and coffee grounds. At 9.5%, there is no alcohol feeling at all and I am actually moving through my 22oz bomber at a good pace. Drinkability is surprisingly high for such a big beer thanks to the sugary, dessert-like flavors. There's a lot of stickiness thanks to the maple which will leave you smacking your lips after each sip.

Calling itself an imperial version of their Maple Bacon Coffee Porter, this variation from Funky Buddha has tons of flavor that will seem like a big ole glass of breakfast. That being said, since I have had the pleasure of having the standard Maple Bacon Coffee Porter (including the 2016 version I got in a trade along with this beer), I will say that I don't think Wide Awake It's Morning is much of an improvement over the base MBCP. Again, I had the 2016 MBCP within a small time frame of drinking this and I think the standard beer packs just as much flavor into a smaller form. Basically, they smell, taste,and feel the same, so you can't go wrong with either. Whichever one is easier to get is the one you should trade for and I don't think there's a need to dish out big time for this beer if you can get regular MBCP at a cheaper price.