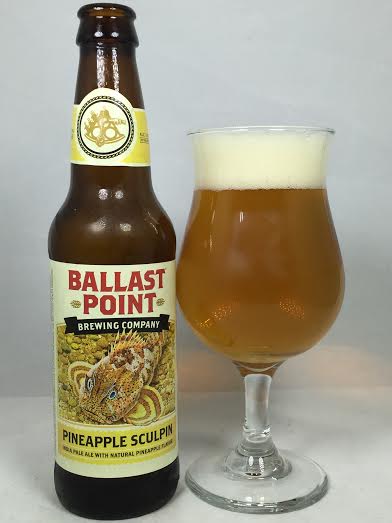 "Our Pineapple Sculpin IPA came from one of many small-batch cask experiments to enhance the flavor of our signature IPA. With so many tropical hop notes in Sculpin, how could we not try adding some sweet, juicy pineapple? The combination of fruity flavors and hop intensity definitely packs a punch."

Today we are checking off another variation on Ballast Point's Sculpin IPA. I have previously reviewed the Grapefruit and Habanero versions, but today we get tropical with Pineapple Sculpin. I remember being skeptical going into the Grapefruit version fearing it would just be a fruit drink with a tiny umbrella disguised as a beer, but that turned out to be delicious. Hopefully Pineapple enhances more than overpowers.

I can smell this even when holding it as far away from me as possible. The aroma is similar to opening a fresh can of Dole pineapple chunks. There is still some moderate earthy bitterness hidden deep back there, but this is really just a fruit cup in a 12oz bottle.

The taste is unquestionably pineapple dependent. Unfortunately I must report that this isn't a fresh glass of fruit juice. Instead it is like the aforementioned can of pineapple chunks, but more along the lines of drinking the leftover juice straight from the can. This would explain the slight metallic taste I am picking up and yes, that is as pleasant as it sounds. That aside, the pineapple is so dominating and unnatural it makes this feel like pineapple shandy rather than a solid IPA. If I concentrate hard enough, a small amount of grassy hops come through on the transition with even a little dank garlic/onion flavor. The finish has some more of that metallic taste which makes swallowing a challenge (...if I had a nickel...).

On the positive side, the body is just as solid and full as regular Sculpin and is right where it should be for a 7.0% IPA. No alcohol to be found, but as I said just a moment ago, finishing each sip can become an uphill battle.

Ranking Pineapple Sculpin with the other two version I have reviewed would undoubtedly put this at the bottom spot. This succeeds as a fruity beer, but when you think of fruit-forward beers, you think "easy-drinking" and "refreshing" which would pair well with a hot Summer's day. This is not really the case here as the pineapple didn't mesh well with the standard Sculpin and had some off-flavors which made drinkability tilt towards the bottom end of the spectrum. Stick with regular Sculpin, but if you want the better fruit version, go to Grapefruit as that acidity worked well with the hop bitterness.