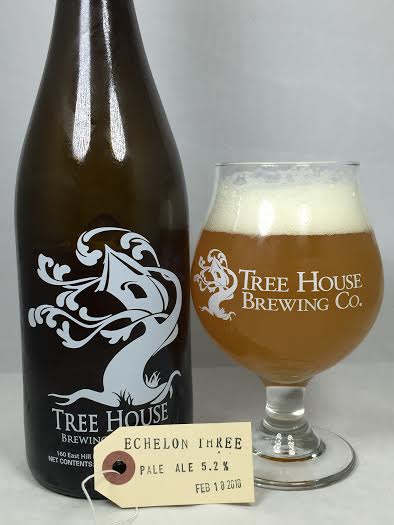 "The third installment of our small batch pale ale series brings some tropical vibes admist the heart of our winter season. Echelon Three features Nelson Sauvin, Mosaic, and a touch of Galaxy hops. She pours a yellow orange color in the glass, and burst with pungent tropical aromas. Her taste follows suit with flavors of oranges, pineapple and white grape. She's pillowy soft, and finishes as delicate as can be...just how we like our pale ales."

The taste mostly reminds of a dry white wine. The most prominent influence from the Nelson hops is that white grape/wine taste, but not as intense as bigger beers that utilize Nelson. I can't shake that fresh mint flavor in the middle as it clings to every taste bud. It's a nice change of pace to most of the other Tree House offerings which are typically juice nukes. There's also some fresh hop dankness and even bits of pine near the finish in addition to some slightly doughy malts.

Mouthfeel is light-to-medium. It feel standard for a pale ale and has some instances of dryness, but is overall refreshing with a lingering lemon zest finish.

Echelon Three has some nice complexity for a pale ale. This small batch series has produced a beer that is different from the juice-forward pale ales/IPA's that have made Tree House famous. It's an interesting mix of flavors that manage to work together well and is bolstered by high drinkability. It's light and refreshing enough for a hot day, but also a big enough beer to satisfy the hardcore fans out there.