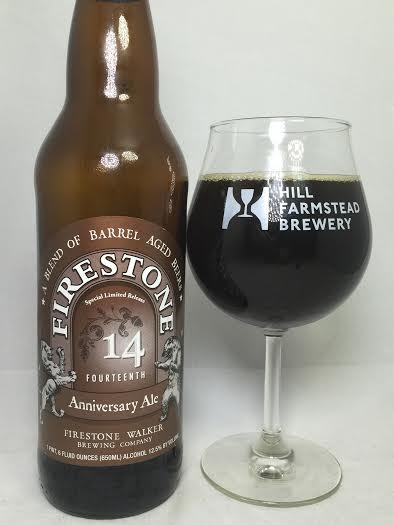 Continuing with my line of Firestone Anniversary Ale reviews, we now come to FW14. As I've mentioned in the past, the FW Anniversary Ales combine multiple FW beers and age them in various barrels. The FW14 final blend is as follows...


Pours pitch black with just a touch of dark brown on the edges. I got less than a finger of khaki-colored head.

The bourbon is still present and sweet on the nose after all these years. Then there's some nice cherry, oak, and coffee.

A noticeable fluffy milk chocolate (think 3 Musketeers bar) is the first flavor that comes to me. The bourbon again is sweet without being cloying or sticky. Other than that a lack of flavors is what is sticking out most. That and this odd black licorice and metallic taste? It quite possibly means oxidation has reared its ugly head which would account for the Sherry-like taste to this, but it doesn't make things intolerable. Some subtle roasted malts and a dull hoppy bite finish things off.

I will say this is still velvety smooth, but has a noticeable lack of carbonation. Some of the licorice lingers for a while on each sip, but no alcohol is to be found in this big beast of a beer.

I've reviewed a few other Anniversary Ales and the freshest one was far and away the best. I think it goes to show (in my opinion) that these Firestone Anniversary Ales aren't the best for aging and should be consumed fresh since the flavors will fade greatly the longer you sit on them.