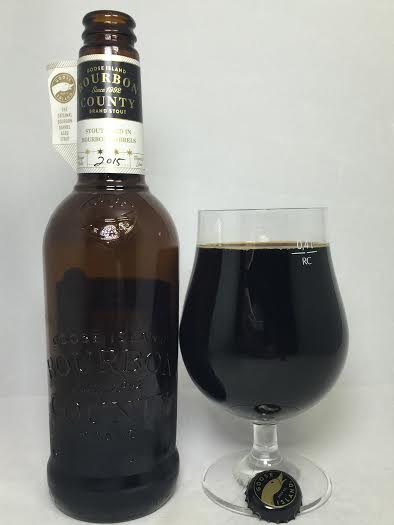 Black Friday may signify the best deals on Christmas shopping for most of the population, but for the beer enthusiasts the day after Thanksgiving means only one thing: Bourbon County Day. Every year on Black Friday, Goose Island unleashes their world famous Bourbon County Brand Stout into the world. Along with that are also the highly-coveted Bourbon County variants such as Bourbon County Coffee and Bourbon County Barleywine. New for 2015 is also the Regal Rye edition and then there is the Chicago-only Proprietor's BCBS. In 2015, Goose Island also released the super limited, brewery-only Rare BCBS which is, as expected, demanding ludicrous returns on trade forums. If you don't mind giving up your first born, signing over your 401K, and letting the trader fuck your wife, then you might be able to land a bottle for yourself (plus you'll have to add some extras and pay for shipping).

In my neck of the woods, I actually managed to luck out and find BCBS, Coffee, Barleywine, and Regal. I knew Regal Rye was limited, but reading through forums, it was actually a borderline miracle that I not only landed Regal Rye, but actually got two bottles! (thank you)

So, for the next few days I will review all four of the variants I was able to acquire. Sorry, I won't be trading for Rare or Prop as I don't have the extra kidney to give, so you'll have to go elsewhere to find out what a total stranger thinks of a beer you haven't had. I will start with the standard BCBS and work my forward. This year's edition comes in at a whopping 14.3% (according to the bottle itself) as was aged for about a year.

Pours jet black with noticeable dark brown edges and less than a finger of brown head.

Obviously tons of bourbon on the nose and then there's a lot of cherry and chocolate. Some pronounced wood and coffee to go along with a tiny bit of black licorice and some tobacco.

The taste is no surprise with the bourbon, but it is so flavorful, sticky, and sweet. The cherry and other dark fruits follow immediately, but taste like they are coated in fine dark chocolate which makes for a dessert-like experience. I detect a glazing of caramel in this which is something I have never experienced in BCBS before, but boy do I like it. The back end cranks up the intensity with a transition to the tobacco and charred oak from the aroma with a noticeable smokey, BBQ pit feeling that I can't shake.

Mouthfeel is exactly as it should be: thick and viscous. At 14.3%, there is no alcohol taste, but each swig is producing warmth in my chest. When held in the mouth, a small gathering of carbonation bubbles make themselves known.

The legendary Bourbon County Brand Stout has lived up to its reputation in my own humble opinion. It's a stellar barrel-aged stout that easily outshines the majority of the competition due to its wide range of intense flavors matched by its high drinkability for the style. If you were lucky enough to grab a bottle, then open one up for these coming Winter nights and sip and enjoy the complexity.