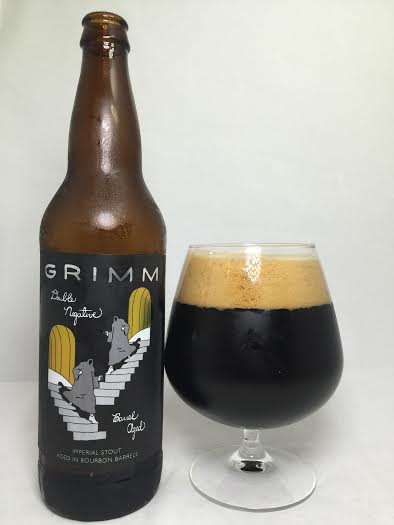 Based out of Brooklyn, NY, Grimm Artisanal Ales is a nomadic brewery that is making a name for itself in the ever-evolving New York craft beer scene. By being a nomadic or "gypsy" brewery, Grimm travels to other locations to make their beer. Their Imperial Stout, Double Negative, gained buzz when it won a gold medal at this year's Great American Beer Festival. I however have the bourbon barrel version which was aged in Heaven Hill barrels.

Pours pitch black with some dark brown on the edges and it produced over two fingers of a light brown/tan head.

Cherry and wood are the first things I get on the aroma. Then there's a creamy vanilla smell with roasted malts. Bourbon is subtle, but still noticeable.

The base stout is coming through big with a lot of roasted malts and coffee, but I do sense that barrel-aging has helped turn down the malt intensity and has made it smooth as silk. Returning from the aroma is a big creamy vanilla which is almost marshmallow-like and almost turns this into a dessert beer. Bourbon is a little more prominent on the taste, but it still doesn't pop like some of the other best-of-the-best BA stouts. If anything, the barrel lends more oak and char rather than straight-up bourbon.

Mouthfeel feels more like a standard stout rather than a BA Imperial. It's still thick and fluffy enough to let you know you're dealing with a big beer, but it is not mouth-coating or as viscous as it should be. At 10%, there's no alcohol or warmth.

Barrel Aged Double Negative certainly touched upon multiple characteristics that you's expect from a big, BA stout, but the bourbon taste and smell could have been cranked up a few notches. That gripe aside, this still is a big-ass beer with everything you've come to love from style. Crack open and sip for hours.