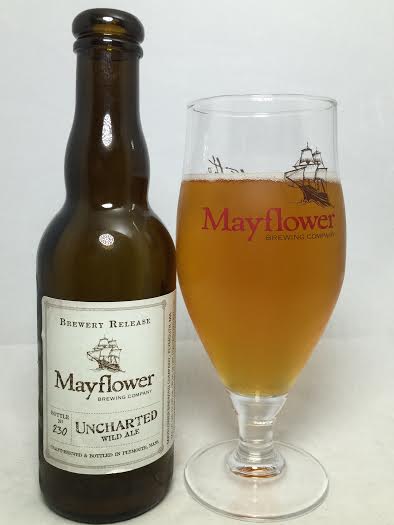 I believe this marks the first "Brewery Only" release from Mayflower Brewing out of Plymouth, MA. They are well-known in Massachusetts and I've been satisfied with most of their offerings and can't really name a bad one. Mayflower has brewed a wide range of styles, but this Wild Ale sounds special. The base beer is a Saison which is then put in red wine barrels with bacteria strains Brettanomyces and Lactobacillus and aged for 15 months. This was a very limited release and I think only two barrels were filled which allowed just a two bottle limit at the brewery.

Pours a mostly transparent, but slightly hazy dark orange. Tons of carbonation coming off the bottom of the glass and it had about three fingers of pure white, fizzy head that disappeared immediately.

Aroma has a lot of tart funk, some grape juice, sawdust and oak with green apple.

Lots of breadiness and tartness on the taste. Some underlying red grape and vinous notes bring a fruity component to a sour ale. There's a sweet flavor I can't quite put my finger on, but the closest thing I can compare it too is caramel or toffee. It's not odd in any way, but I didn't see it coming from a brew like this. If the base saison contributes anything it is some barnyard funk and sawdust, but they are obscured by the bacteria and red wine characters.

The abv of this beer is unavailable, but the feel is fuller than a lot of other wild ales or saison's I've had. It's not syrupy and unpleasant, but it's definitely not light by any means. Whatever the alcohol content is, you can't taste it at all. The tartness is actually nice and refreshing without being too mouth-puckering.

Uncharted took time and care to make and the efforts have produced a good wild ale with plenty of tart qualities, red wine influence, and unexpected sweetness. Throw in some subtle fruits and funk and this has plenty of complexity to satisfy sour lovers.