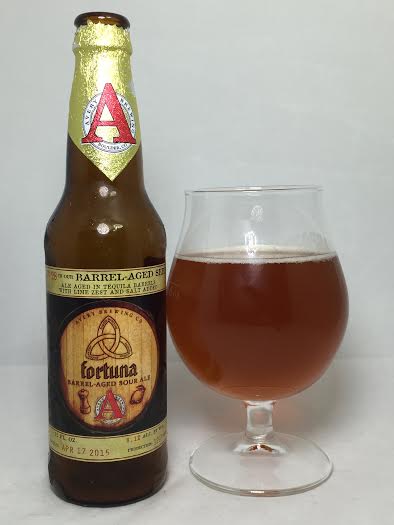 The Avery Barrel program is notorious for producing high abv, but flavorful beers of every style. I've previously reviewed some of Avery's barrel-aged beers and have found them to be delicious with strong barrel presence. Oddly enough, those were both pumpkin beers, but today we move to a completely different style with a sour. Fortuna is a sour ale that was aged in Suerte tequila barrels with salt and lime zest. Sounds intimidating to me.

Pours a hazy dark orange with a small amount of carbonation and less than a finger of white head.

It smells like top shelf tequila with a ton of lime and salt. It's full of brine-like pickle juice, but I am digging it. I'm also getting some spices which are similar to nutmeg and maybe even cinnamon. What?

In my experience with tequila aged beers, I have found almost 100% of them tend to be too hot with a significant amount of alcohol taste. Fortuna appears to be the first one I've had that got it done right.

To describe the taste would be to imagine licking salt, taking a tequila shot, and biting into a lime, but now it is soured with great bacteria strains. The oak and tequila are first and foremost, but that salt just dominates immediately after. It's like the salt flavor of a world-class Gose, but amped up and somehow doesn't make your eyes water. In the numerous IPA's I've reviewed, I find a lot of this lemon zest quality to them, but here, it is a juicy lime zest that adds intensity to the tequila and salt. Standing firmly next to the juices and salt is the sourness of those bacteria strains which when combined with the salt make for a truly mouth-puckering experience.

When you hear salt plus bacteria, your mouth dries up just thinking about how tart this could turn out. If I had to deduct points for anything it is that while this has managed to pull off insane drinkability, it is noticeably dry. Just have some water handy as you sip on this one. Avery barrel-aged beers usually come with huge abv's, but at "only" 8.10%, this is tame by Avery standards, but it still makes full use of it's weight. As I said before, no alcohol taste with the high quality spirit they used, it is smooth as all hell.

This is probably the best sour beer I've had, and easily at the top of "American Wild Ale" category for me. It's flavorful, tart, complex, and drinkable. Those who don't wish for such a tangy sour will stray away, but those who love the style are in for quite the experience.