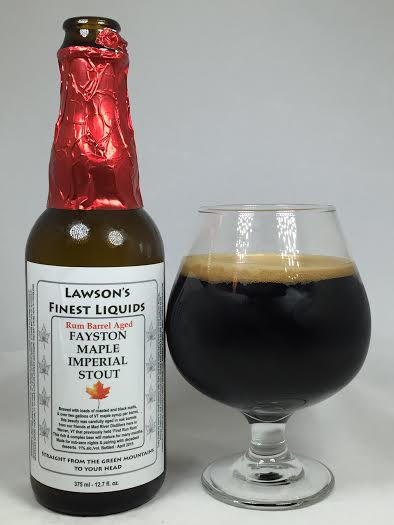 A variation on their standard Fayston Maple Imperial Stout (which is made with over two gallons of maple syrup per barrel), this version was aged in rum barrels from Mad River Distillers in Warren, VT. I got this in a trade a few months ago with some other Lawson's stuff. Thanks, Tyler!

Pours pitch black with no light getting through at all. I got a finger of light brown head that stuck around surprisingly well.

Aroma has roasted malts, chocolate, vanilla, marshmallow, oak, and some subtle coffee. It's very sugary sweet and the rum isn't a sweet, hot, mess, but is spicy and smooth. Very nice, but maple is sadly lacking.

The rum barrel is the star of this show on the taste. Sweet and spicy rum with huge oak and hints of toasted coconut are what I get first. There's almost a licorice flavor followed by tree sap. I think the sap is the closest thing I am getting to maple syrup, but as for maple itself, I really don't pick any up. Maybe it is lost in all of the sweetness of the rum, which would be unfortunate. After that is some molasses and brown sugar with roasted coffee and maybe some slight caramel too.

Mouthfeel is thick and luscious. This is a big beer at 11.00%, but there is no alcohol taste and no warming sensation at all. Considering how sweet this is, nothing clings unpleasantly to the tongue. It's a little sticky after all is said and done, but that's not a deterrent.

Rum Barrel Fayston might have been lacking in the maple department, but it's almost forgivable considering the buffet of other flavors at your disposal. If Bourbon County was aged in rum barrels, then I would dare say this is comparable. It hits all of the notes on the barrel-aged stout scale, but as opposed to other offerings, this has incredible balance and the barrel isn't overpowering or bland. Thumbs up!