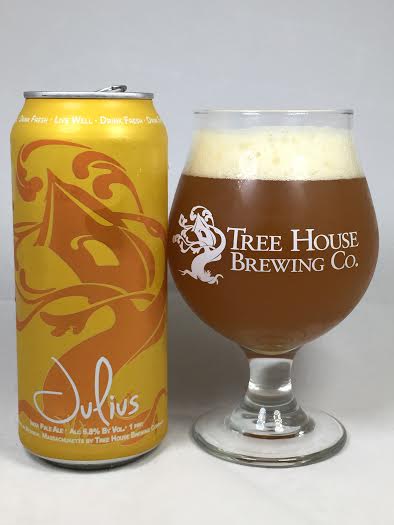 Earlier this year, Tree House Brewing moved operations to a bigger home with a larger barrel capacity and opened a canning line for their beers. Arguably the most anticipated for the canning line was their flagship IPA: Julius. I previously reviewed this beer last year and it even made my Top 10 Best Beers of 2014. So, mostly for fun, I wanted to re-review Julius and see how it holds up a year later. Plus, I wanted to show off the new cans (giggity).

I must say this tastes much sweeter than last time. The best way I can describe it is sugary fruit juice, but not artificial at all. I think the most dominant fruit I get is grapefruit as this does have some acidity, but with it's sweetness, it's more like sprinkling some sugar on a sliced grapefruit. Also just as impressive is the big hop bite of herbal/grassy hops that produce some nice resins and oils. The finish then goes back to the sweeter notes with my burps being bitter hops. Very well balanced.

Mouthfeel is medium-bodied and refreshing. There is no dry feel or aftertaste and no alcohol taste. There's a lingering hop oil taste that makes me wish for more juice on the finish, but it is still a delicious flavor.

Compared to my last review, Julius has held up tremendously well and it's great to see that the beer hasn't gone down in quality since Tree House moved to their larger production facility. The fact that it is now in cans is just like adding biscuit wheels to the gravy train - it makes everything better. Not much more to say, but now that it is in cans and more readily available, you definitely need to trade for this beauty.