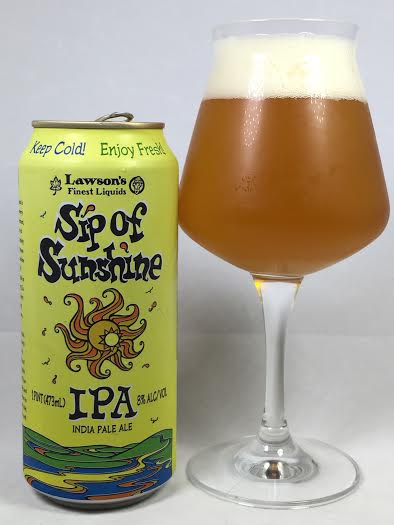 Lawson's Finest is one part of what many consider "The Big Three" of craft breweries up in Vermont (along with The Alchemist and Hill Farmstead). Their hoppy beers are things of legend and Sip of Sunshine has made its mark within the past year. It was originally available in 22oz bombers, but now comes in 4-packs of 16oz cans and is brewed at Two Roads Brewing in Stratford, CT.

Classic hazy, golden orange on the appearance with a finger of white head.

The aroma has some subdued tropical fruit juice with a slight grassy hop character and a subtle caramel sweetness.

Resinous (but not syrupy) hops are the first thing to hit my tongue. A nice piney and herbal bite is a welcome first impression. This also has its fair share of juicy hops as I get some nice pineapple and orange. It finishes with just a hint of garlic/onion which isn't overpowering and doesn't overtake the more prominent juice and herbal characters.

For such a hoppy brew, this is not an intimidating IPA to drink and it finishes rather clean to boot. The 8.00% abv just carries it into Imperial IPA territory and that shows with a soft body and easy drinkability.

Sip of Sunshine is a well-crafted Double IPA that has serious hop bite that won't destroy your palate. The hopheads will love the diversity in the hops used and the resin-forward taste. Those who want a juicier Imperial IPA will also enjoy the array of tropical fruits and comfortable mouthfeel.