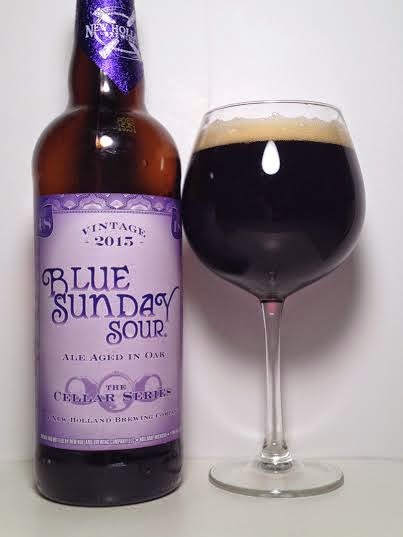 According to the label, Blue Sunday is a blend of other New Holland sour beers. The website description isn't any more helpful as it just says "blend of several beers" for most of the ingredients. Frankly, there isn't a whole lot of info on it, which is good in terms of I don't know of any hype, but at least tell me what's in the god damn beer before I drink it! After further digging, it turns out that the beer is named for the repeal of "Blue Laws" which banned alcohol sales on Sundays.

The aroma reminds me of a lot of Flanders Red ales with its huge balsamic vinegar and flowers. Some cinnamon and oak finish things off.

There's a small amount of cherry, blueberry, and blackberry, but they aren't the dominant flavors. A lot of this beer contains sweet caramel and flowers. Maybe some raisins or plums, but it also has the acidity reminiscent of biting into a lemon rather than pleasant tartness from the bacteria strain Overall, it's a little disjointed.

The body is light, but thin with plenty of carbonation. You'd expect an aged and blended sour to be tart, but balanced with an abundance of flavor, but this comes off as tart as a result of bad bacteria rather than careful oak aging.

Blue Sunday delivers on being sour, but it's not really as balanced as it should be. There are some dark fruits to pick out if your senses are attentive enough, but the end result of this beer is a pretty bland sour ale that doesn't know if it is a fruit lambic, a flanders red, or a wild ale. Some (barely) decent tartness prevents this from being totally blacklisted, but there are plenty of other options widely available that will outshine this offering.