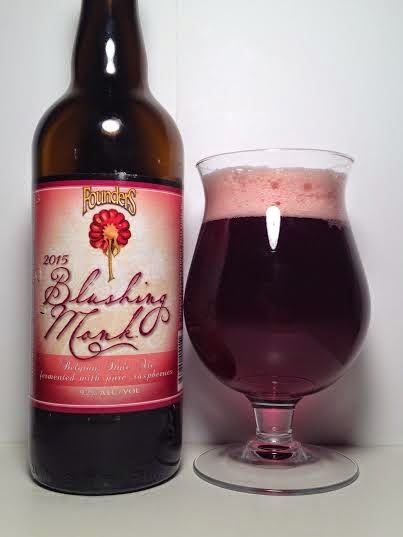 Originally released in July 2011, Blushing Monk was the first ever release in Founders acclaimed "Backstage Series". This Belgian raspberry ale is brewed with, as Founders says, "a ridiculous amount of raspberries and a Belgian yeast strain.". After the release of their raspberry stout in December 2014, Founders announced their intention to re-release Blushing Monk. This started speculation that Founders had won a lifetime supply of raspberries and were simply trying to unload them on the public. All jokes aside, the re-release of the first Backstage Series beer has people hoping Founders will be doing that with others.

The aroma is obviously massive raspberries,but more like a raspberry candy. There's maybe a faint Belgian character and some funk, but you'd really have to concentrate hard to dig it out.

If I had to describe this beer it would be "Liquid Jolly Rancher". I do detect some tartness and slight funk which saves this from becoming just raspberry juice, but I really can't pick up and authentic Belgian characteristics. If you've had Founders Rübæus then this will be eerily familiar territory as a blind taste test would have you confusing one for the other.

Mouthfeel is light with little carbonation. As I said, this drinks like a liquid Jolly Rancher, and that carries over to the palate as it does finish quite sticky and sweet. On a positive note, you can't detect the 9.20% at all.

Considering this was a revival of the first ever Backstage Series release, I was hoping for a stellar offering. I mean, I can take the beer at face value and say that yes, this is a raspberry beer. If that's all this was trying to be then it was successful in being a clone of Rübæus. While there was some noticeable and even pleasant tartness, there was no Belgian yeast on the taste which would have brought more complexity. This absolutely delivers as a refreshing raspberry beer, but it failed to deliver on any Belgian character. Stick to Founders Rübæus and you'll pretty much get the same experience.