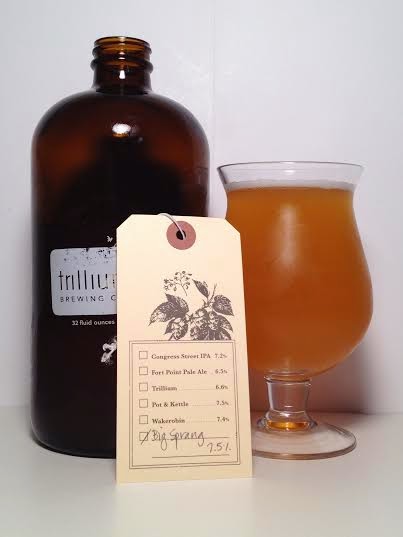 My first Kölsch! Bog Sprang is an amped up version of Trillium's Sprang, a sessionable 4.90% Kölsch. Big Spraing is turned up to 11 (well, 7.50%) and is brewed with Nelson Sauvin hops.

Pours a light orange, bordering on pale yellow with half a finger of pure white head.

It has a ton of lager character on the aroma. It's very crisp and clean with a ton of breadiness (almost like a biscuit or a cracker) and some subtle white grapes from the Nelson and some fresh melon.

The hops are more bitter and dank than I thought they would be, but I'm not saying that like it's a negative. The breadiness is still prominent on the taste, but in the middle of the mouth the Nelson takes over with a burst of white wine. Some nice, ripe melon and even a touch of mango or peach.

Big Sprang is light to medium on the mouth and very crisp at the same time. The carbonation is more than I expected (as I belch when I type that last sentence), but it still remains drinkable. Oh, and 7.50%? I'd love to know where that is hiding.

This was my first Kölsch, and it was a good one. The breadiness might have been too much, but the Nelson hops were able to combat it by adding multiple fruity notes with white wine. This is a pretty unique beer with lots of flavor and drinkability.