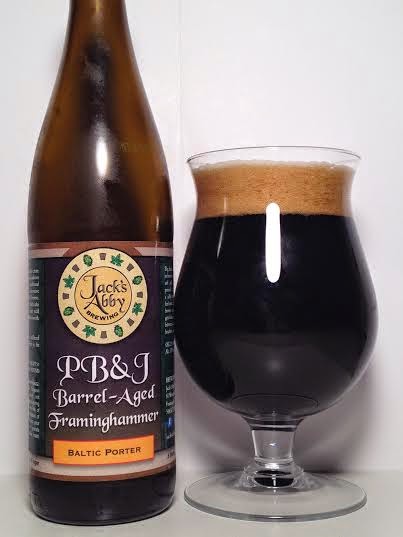 Peanut butter has become the new "it" ingredient for stouts and porters. Frankly, it's a good call because when done right, it is delicious. Our latest Framinghammer variant is brewed with peanut butter and raspberries. Then of course, it is aged in bourbon barrels.

Pours jet black and I even got a little over a finger of a light brown head.

As soon as I stuck my nose into my glass those raspberries smacked me right in the face. You have to try and find the bourbon with all of the raspberry, but it's there. Some roasted malts too, but I can't pick up any peanut butter. Maybe something similar to peanut shells, but this is a raspberry bomb.

Holy chickens! Well, maybe I wouldn't go far enough to quote obscure Ben Affleck films, but the peanut butter has shown up on the taste. Definitely more along the lines of whole peanuts - shell and all. Raspberries have been throttled back for the taste which is nice to see they weren't going to dominate my palate. The bourbon comes through on the finish with some roasted coffee and even some chocolate. There's even a hint of smoke, but nothing Rauchbier-like. It's sweeter than any of the previous variants, but it's not cloying.

As usual with the Framinghammer series, this has a nice, thick mouthfeel and is velvety smooth with no carbonation. Again, no cloying flavors, but maybe a small lingering sweetness. It's not too bothersome, though. As stated with the others, the 10.00% is non-existent. It has a robust body and flavor profile, but drinks lighter than you'd think.

PB&J is another solid addition to the Framinghammer lineup. While sweeter than the rest, it has some genuine raspberry flavor, but that tends to overpower the bourbon and peanut butter. That being said, every flavor is present and the barrel-aging helps even everything out on the taste. I can only imagine this would have been pure raspberry juice if it wasn't aged. Like the others, it drinks easy and is a rich experience. If you want a fruitier Framinghammer, this is your brew.