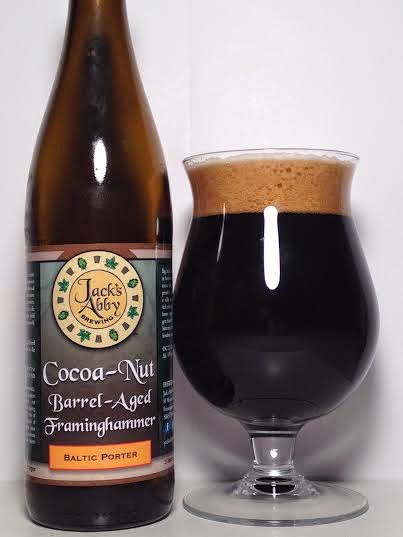 This is a re-review of one my first ever posts. Even in my short time, I know my style of reviewing and writing has come a long way, so while I was reviewing all of the Framinghammer variants, I knew I had to give this one another formal treatment.

Pours jet black with ruby red and brown on the edges. An aggressive pour produced almost two fingers of a light brown/tan head which disappears quickly.

That aroma is so enticing. I can best describe it as a liquid Mounds bar. It's toasted coconut and melted chocolate all the way. Then there is some roasted coffee and and wood with sweet bourbon.

The taste is not only melted chocolate, but a rich, dark chocolate. Definitely more of that toasted coconut followed by a gush of that smooth, sticky bourbon. Some dark roast coffee and oak in the middle of the mouth to go with roasted malts. The finish has almost a maple syrup flavor with a hint of vanilla.

The mouthfeel is thick and viscous like a big Imperial Stout. At the same time, I'm picking up more carbonation than usual in relation to the other Framinghammers. It's definitely a sweet beer, but by no means cloying or sugary. The 10.000% is undetectable and as usual and this is another variant that is luscious and velvety.

Cocoa-Nut Framinghammer edges out the Vanilla Framinghammer as my personal favorite of the variants. There is a ton of chocolate and coconut for fans of sweet beers, but at the same time there are big bourbon and stout qualities to entice the big, barrel-aged beer purists. It's smooth, thick, and flavorful (c'mon, guys!) and makes for an ideal dessert beer for your next meal. Complex, sweet, and drinkable, this clearly stands out as the best in the bunch.