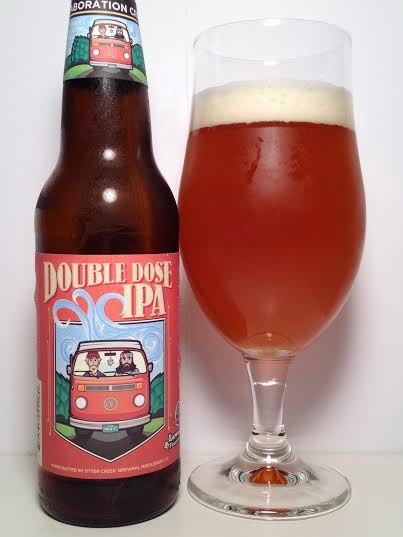 Last year New England was hit with a collaboration that sent waves through the Northeast. Those outside of Vermont have rarely had the opportunity to try a beer from Lawson's, so this offering was many people's first chance. The best part was that the style they chose to do (Double IPA) was right in the Lawson's wheelhouse. Sometimes when brewers team up, they choose to collaborate on a style they aren't accustomed to, but it's always good to see two great brewmasters stick to something more traditional and knock it out of the park. This year marked batch two of Double Dose and I could not be more excited after last year's home run.

The aroma is a lot of bitter, piny, hops with splashes of orange and mango.

This year's batch seems to be more bitter than juicy, but I'm not saying that in a negative way. Not sure of they changed anything, but I am getting significantly more floral and grassy notes than last year. The juicy flavor is big on the finish and has an acidic quality like fresh-squeezed orange juice. It's a really solid combination of earthy, piny, and citric hops with just a touch of onion and garlic.

Mouthfeel is medium with a slight syrupy quality at times, but also good carbonation. The bitterness lingers for a while on the palate, but the finish remains relatively clean.

Double Dose was a winner again this year, but for different reasons. As I said before, I remember this being a hell of a lot juicier the first time around, but I'm not going to lodge any complaints with this year's batch as the hop oils and resins produce a satisfying, piny bitterness that I will be looking forward to next year (hopefully!).