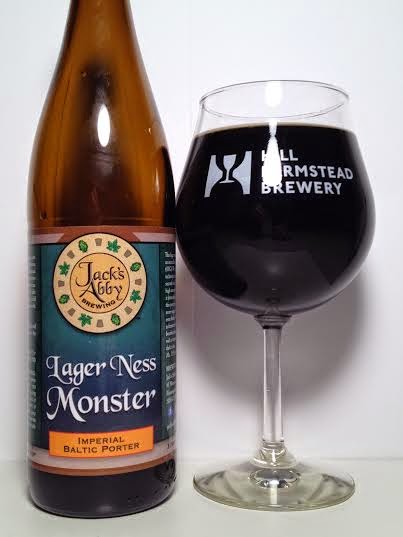 Coming in at a staggering 15.00%, Lager Ness Monster is by far the biggest beer ever made by Jack's Abby. How did they make such a big beer? I'll let the website description tell the story...

"During the first stage of the brewing process we mix hot water with our malted grains in our Mash Tun to extract the sugars from the grain that will later be fermented into alcohol.  The resulting liquid from this process is called wort.  For Lager Ness Monster we did this process once, then we refilled the Mash Tun with more grain.  This second time, instead of using water to mix with the grain, we re-used our wort from the first batch and concentrated it.  This allowed the wort to pick up more sugar than our normal process would allow, resulting in a 15% abv monster!"


Then, for an extra kick, it was aged in bourbon barrels for six months. There's nothing more to say, so let's dive in.

Pours pitch black and thick like ink and not surprisingly this gave off absolutely no head. This could be mistaken for flat Coca-Cola. Most Baltic Porters are dark brown or have hints of dark brown, but this is the darkest Baltic Porter I've ever seen. It looks like a barrel-aged Imperial Stout.

The first thing on the taste (and rightfully so) is sweet bourbon. A lot of charred oak from the barrel, and big dark fruits are the most present flavors. A nice pop of roasted coffee/espresso is in the back with a small vanilla kick on the finish.

If I was blindfolded, I would say this is a big, barrel-aged Imperial Stout. It is so thick and viscous and it coats your entire mouth. At 15.00%, there is a warming sensation in your chest on the finish, but there is absolutely no alcohol taste at all. I don't know how they do it, but I don't care. Considering the abv, this remains insanely smooth and drinkable.

As far as Baltic Porters go, this is easily the the best I've ever had. The difference between this and other Baltic Porters (or other Jack's Abby Baltic Porters for that matter) is how it feels more like a huge Imperial Stout. The mouthfeel is thick and robust and can not only compete, but surpass most barrel-aged stouts. I'm not bullshitting when I say that this is comparable to Goose Island Bourbon County Stout. Yeah, it's that amazing!

If you've had Jack's Abby BA Framinghammer, then just imagine that amped up to 11. If it is this good now, then I can't wait to see how my other bottles do a year from now. With such a high abv, this is no doubt a sipper, but it's so drinkable that you might gulp the whole thing down and regret it later. I swear, Jack's Abby barrel-aging program is one of the best in the country. Please believe me when I tell you that I am trying not to be a hometown fanboy, but I can't find a flaw with this beer and it deserves all the praise it gets.