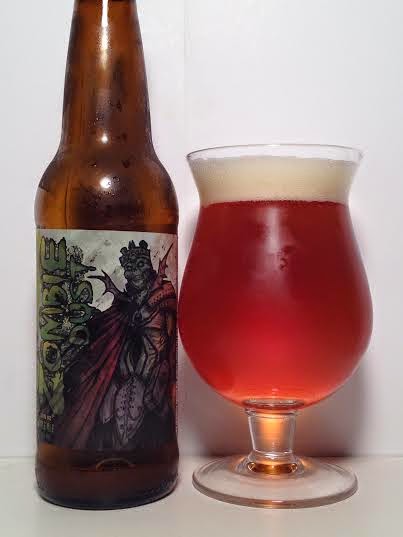 Reviewing such a highly-acclaimed beer with loads of hype is never an easy task. Current ranked as the 10th best beer in the world on Beer Advocate, this APA is brewed exclusively with citra hops.  With expectations set so high from the start, it makes it hard to not assume greatness. I try not to let that effect what I think in my reviews, so let's give the infamous Zombie Dust a fair shot.

Pours a beautiful, glowing orange with two fingers of white head. It's slightly hazy with some decent carbonation.

It smells like fresh-squeezed citrus. Just huge tropical goodness with oranges, pineapple, and mango. Behind that is fresh hop bitterness. It's a well-balanced aroma that smells great.

If blindfolded, I would think that was more towards an American IPA than an APA. There's a big hop presence at the start which gives way to those tropical fruits on the back end. The juiciness of the hops and the fruitiness of the orange and mango flavors don't battle for your attention as they are living in harmony on your tongue.

There is no bitter, lingering flavor as I mostly get a clean finish with only some leftover citrus which is very pleasant. As I mentioned before, it taste more like a standard IPA with it's big hops flavors, but it is very clean, smooth and goes down easily. you could easily kill half your six-pack if you're not careful.

I can't find any flaws with this beer. Does Zombie Dust live up to it's hype? For me, I would say yes. With a style like APA, it's easy for the taste and feel to be lacking in hops, but ZD has an incredible balance of juice and hops that is a delight to drink. If this was available in my part of the country, there is no doubt it would be in my fridge at all times. If you want it, you'll have to make a trade with someone in Indiana and the surrounding area, but it is well worth the effort.