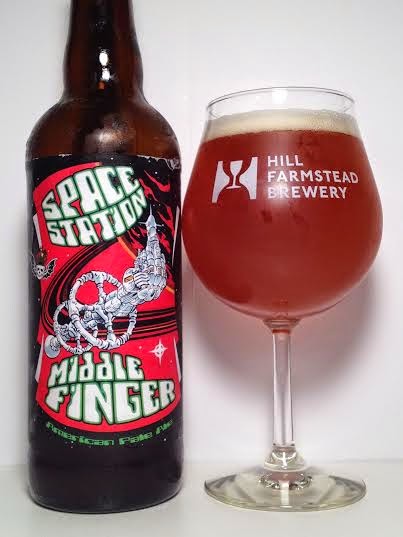 I received this bottle as an unexpected extra in a trade. I know a lot of Three Floyds beers, but this one is new to me. If the beer is as awesome as the label art, then I know it's going to be a winner.

Pours a murky, golden orange with about a finger's-worth of white head.

It has a sharp, resinous smell to it. A little bit of pine and some onion/garlic flavor too.

I must say, this has to be the most bitter APA I've ever had. It's just an onslaught of bitter, bitter hops at the front. Pine is also another major component as it's just battle between the hop bomb and the pine forest. Most the of APA's I like lean more towards the juicier side, but I'm not hating this bitter bomb of a beer. It actually reminds me a lot of Oskar Blues Dale's Pale Ale, and hey, that's not bad company to be in.

There's a lot of carbonation on the mouthfeel. It can be a bit sticky at times, but that carbonation moves it along. With all of it's bitterness, I am easily chugging away on my bomber.

When you hear the words "Three Floyds American Pale Ale", you may tend to think of Zombie Dust first, which can leave a solid beer like Space Station Middle Finger in the shadows. While it's more bitter and piny than typical APA's, it is bold for the style and drinks easy. Nothing wrong with that.