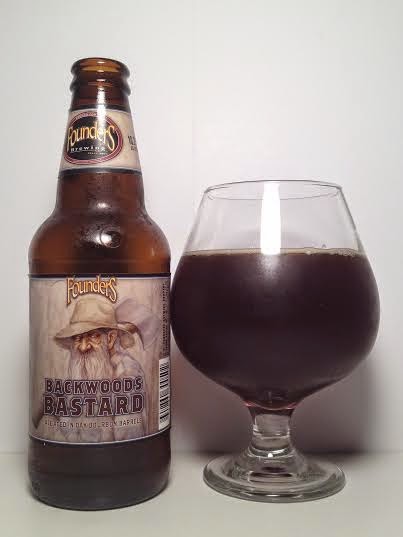 The weather is getting cooler and I feel like warming up with a high gravity scotch ale. In this case, it is Backwoods Bastard: a scotch ale aged in oak bourbon barrels. The 2013 batch was my first time experiencing this beer when I picked some up last November. With the latest release due out later this Fall, what better time to do a review than now?

Pours a dark, ruby red, almost mahogany color. I got maybe half a finger of head on the pour, but it didn't stick around long.

The aroma is very sweet. Toffee and caramel are what stand out first. The bourbon is there, but it doesn't dominate or take away from the other flavors. A slight oak/wood presence too and some vanilla is in the background.

One sip in and I see that this is going to be a sweet beer. Not "sweet" as in "wicked pissah!", but literal sweetness. I'm met with a toffee bomb encased in charred oak. There are some hints of vanilla, but not present enough to be the #1 flavor you point out. Some dark malts on the back end with a faint raisin-esque touch. Not a whole lot of bourbon, but in this case it seems like it isn't for taste, but rather to smooth everything out.

Speaking of smooth, this goes down nicely for 10.2%. There's no alcohol sting on the nose or taste. I wouldn't say it's light for the style, but it does come up a tad thin on the mouthfeel.

Backwoods Bastard has a complex offering of flavors on the aroma and taste with high drinkability for a 10.20% abv. Considering this is bourbon barrel-aged, I was hoping for more bourbon on the taste, but a strong oak character blends well with the other sweet flavors of toffee and caramel. While it does come up a bit thin, the buffet of sweetness and a smooth feel will keep you coming back for another round.