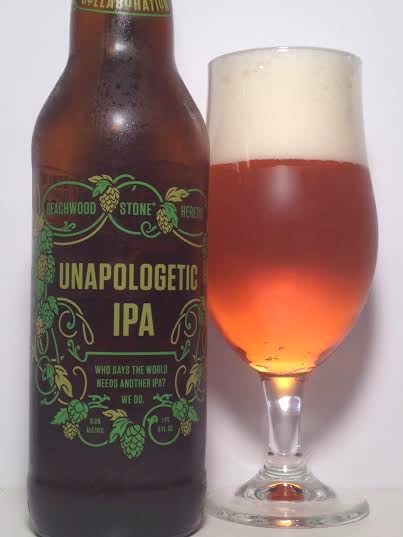 "Who says the world needs another IPA?"

From you, Stone? I never said we did. Granted I don't speak for the world, but if the survey was just down to this guy, then I would have voted an emphatic NOBODY!

Stone Brewing and I have a history of not getting along when it comes to their IPA's. I personally think they must brew with whole bulbs of garlic and onion because that's all I ever get. That's not to say I dislike all of their brews. Not at all. I love the Arrogant Bastard, Double Bastard, Lucky Bastard, etc. as well as their Sublimely Self-Righteous and any variation on the Stone IRS. It's just when it comes to IPA's, it leaves a bad taste in my mouth (literally and figuratively).

Ruination isn't bad, but the "Enjoy By" series I can live without. I've had the last two batches of "RuinTen" and it is always a disappointment. Wow, enough with the ranting!

So, here we are today with their latest offering...ANOTHER IPA. This collaboration was done with Heretic Brewing and Beachwood BBQ and Brewing (on my list of places to visit). All of which are out of California. It uses all experimental hops each with different tastes and aroma, but promises to be a hop monster.

I can tell you right now, I can't bitch and moan about the appearance because this is a beautiful golden orange. You would want to light up your room with it.

As we dip into the aroma, I am bombarded with the usual onion that I've come to expect from Stone Brewing. In addition, I am oddly getting a substantial breadiness quality, almost like a KFC biscuit. It's also acidic like a fresh grapefruit with hints of resin.

As promised, it's pretty hoppy on the taste and that's obviously what they were going for with all of these experimental hop varieties. In addition to that garlic/onion, I am getting subtle hints of strawberry. It's a dry finish with a heavier than usual body. Not syrupy, but thicker than I had anticipated.

When all is said and done, I actually prefer to this other Stone IPA's. The taste isn't off-putting and it's got a nice dry, fruity finish without absolutely assaulting your taste buds with hop resin and onions.