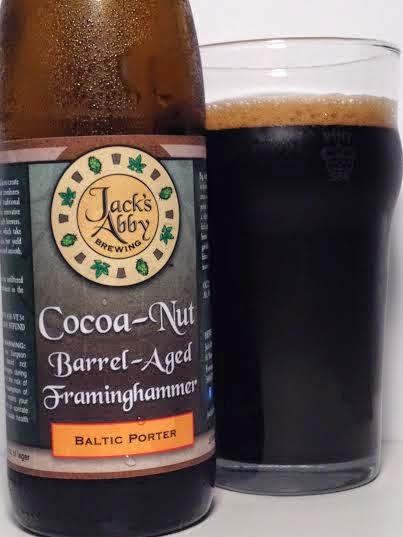 A long time ago at a brewery far, far away in Framingham, Massachusetts, Jack's Abby took their Framinghammer Baltic Porter and barrel aged it. In addition to a standard bourbon barrel version, they released several other variants including Coffee as well as Vanilla. New this year (to the best of my knowledge) they added Peanut Butter & Jelly and Cocoa-Nut to the family. I had the Cocoa-Nut on draft back in March and remember it being a sublime experience. To my surprise, Jack's Abby did another release and actually put it in bottles. How was it the 2nd time around?

As soon as I popped the cap, just a gush of chocolate and coconut filled the room. I stuck my nose into my nonic glass and I was speechless solely because I could not stop smiling. Aromas of chocolate, coconut, vanilla, bourbon, and roasted malts knocked me on my ass.

If it wasn't for the 10.00% abv, I would have easily chugged this down. It's velvety smooth and rich. The milk chocolate hits you first and then shredded coconut and bourbon cap it off. It's just an array of sweet flavors and none of them overpower one another. A mild coffee bitterness hits you in the aftertaste.

This doesn't drink like a 10.00% abv beer. In fact, the standard Framinghammer is listed at 10.00%, so I'm sure the barrel aged version must be kicked up a couple of notches to around 12.00-14.00, but I didn't brew it, so I'm not the one to see about that. In any case, you can't taste the alcohol at all which makes this beer dangerously drinkable. It's ideal for an alternative to dessert as it ranks up there (and beyond) with imperial stouts and other chocolate/sweet stouts. After I had it back in March, I was hoping they'd release it again and my prayers were answered. It is just as superb as it was back then. Very glad I have a couple of bottles saved so that I can enjoy it all year. I may have found the best beer of 2014.