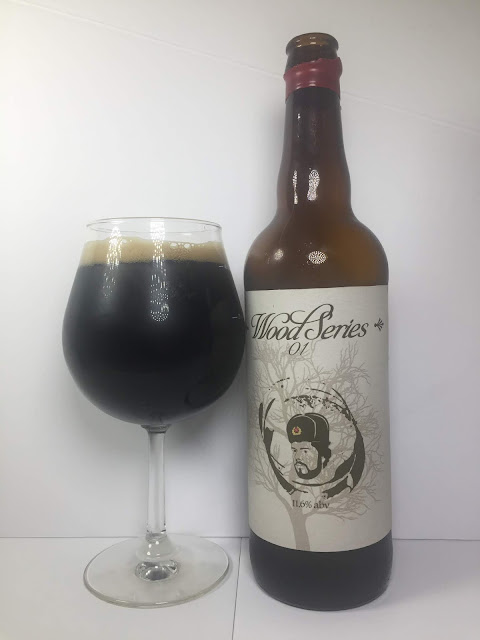 BREWER'S DESCRIPTION
"As we culminate our first year at our brewery, we offer you this warm, big, textured Russian Imperial Stout aged in Buffalo Trace Bourbon Barrels. A play on our Donut Shop utilizing additional hops, Belgian Candi syrup, lactose and of course coffee, we could not be more pleased with the results! Cold Brewed by Widowmaker Brewing, using roasted beans from Red Eye Coffee Roasters: 3 Otis Street in Hingham MA"

APPEARANCE
Pours pitch black with just the slightest ruby red on the edges with less than a finger of almond-colored head.

AROMA
The aroma is dominated by sweet, sticky bourbon. It is almost sugary sweet with maybe notes of caramel and toffee. A bitter, dark coffee smell is also just as big, but then there's also big cherry and dark chocolate. Additionally, I'm picking up a small bit of tobacco and some boozyness is definitely present.

TASTE
Not surprisingly, the bourbon is first and foremost and it is followed by that caramel and sugary sweetness from the aroma. I get almost a molasses and tree sap flavor from this with a small influence from the wood from the barrel. As it warms, fluffy milk chocolate emerges for some relief from the darker, more bitter flavors, but it still keeps in line with the overall confectionery theme this one has going on. If you can get past the sweeter moments, you'll find some smoke and char from the barrel and maybe even a little black licorice or anise. I must say that this doesn't have a burning, alcohol taste, but it is considerably boozy and that often is the exclamation point on each sip.

MOUTHFEEL
The body is thick enough to be called an Imperial Stout, but I can't help but feel it should be much more thicker and viscous for an 11.6 % BA beer. Still, it meets the requirements. As I said before, booze is noticeable, but it doesn't do enough damage to ruin the beer. It's a sipper for sure, and would come in handy as these nights in New England start to get colder.

OVERALL
BA ComRAD is a flawed, but satisfying Imperial Stout. It hits all the items on the checklist of what you are looking for in a bourbon barrel aged beer, but I personally feel the booze was a bit too prominent. It's not without its imperfections, but as a big, warming beer with good barrel character, it's mighty fine in my book.