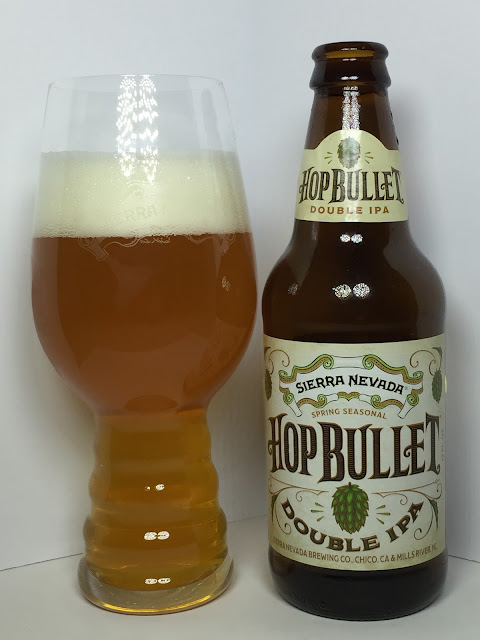 "Hops are the name of the game with a Double IPA, but we knew we had to take it one step further. With Hop Bullet, we’re using a new technique, hitting the beer with a double-barreled blast of Magnum hops and lupulin dust—pure, concentrated hop flavor—directly into the tank to emphasize the intense pine and citrus flavors of classic West Coast hops."

Pours out rusty and dark orange in color with a moderately hazy body and two fingers of white head.

The aroma is fresh with herbaceous mint and green tea. Some subdued orange rind and faint garlic/onion are also here and it has a good malt presence.

There's a decent amount of pine on the taste, which I didn't pick up at all on the aroma. It is akin to a pine tree air freshener. The other big flavor I get is caramel (probably malts) and it adds a sweet element to the beer. Fruitier notes develop as the beer warms with sugar-sprinkled grapefruit adding flavor and some tartness and it is joined by sporadic moments of pineapple. There's a good shot of bitterness near the back and it has a dank sensation to it, but at the same time, it is a very clean-tasting hop presence with noticeable acidity. This leads into the finish as the back end and aftertaste have that lingering hop oil flavor.

Mouthfeel comes in a bit light for an 8% DIPA, but it's serviceable. Some alcohol rears its head from time to time, but is more spicy than stinging.

How effective would Hop Bullet be as actual ammunition? For comparison sake, I think this would have missed JFK from the book depository, but would have hit him from the grassy knoll.

Hop Bullet may not be the strongest or most bitter Double IPA, but it still has classic elements of West Coast IPAs and still feels like a big beer at the right times.

VOICE IN MY HEAD: Your analogy still sucked.