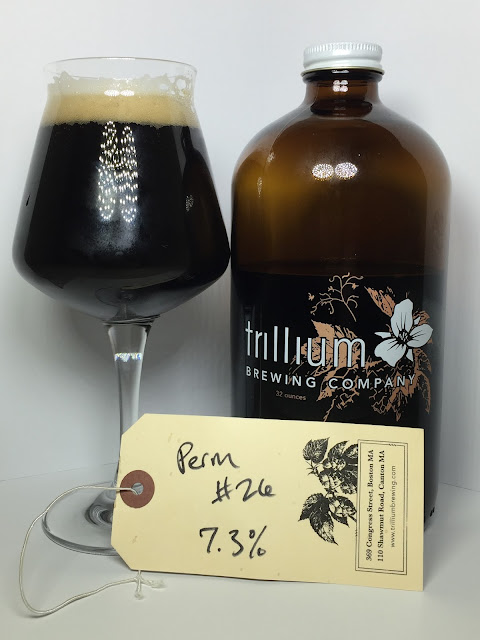 "Permutation is our experimental series of small batch offerings, showcasing the unique visions and innovative concepts developed by our brewing and cellar crew.

Permutation 26 presents an opaque deep black color. The nose reveals an interesting mix of roasty, chocolate, and dark pretzel aromas paired with notes of pine and an inviting floral scent. The palate follows with flavors of dried apricot, pine, juniper and a light roast character. Smooth, light bitterness, and a dry mouthfeel round out this Black IPA."

Pours to an impressively pitch black body with no other color in sight and a finger of fluffy, almond-colored head.

Juicy hops and pine on the aroma. Tree sap and earthy tree bark are abundant. At the same time, it is heavy on the roast with an underlying chocolate aroma. Red grape, raisins, and molasses are in the back along with a nutty sensation.

The initial flavor up front is lots of roast. Not as in malty, but I think it's more of a coffee roast. Along with that, juice-forward hops with flavors of oranges and pineapple are playing just as big a role. A cherry, almost cherry syrup, is prominent and adds a sweet quality to balance out the roast. The juicy flavors outweigh the roast as orange citrus is at the end of each swig as well as being the overall sensation on the finish. Not to be outdone, a bitter pine character sticks to everything all throughout. Making a return from the aroma is that mild chocolate flavor that has taken the form of cocoa powder and even some chocolate milk. Simply put: This is delicious.

The body is full with the roast and bitter qualities leaving the mouth sticky. The body is crisp, but also smooth. The alcohol is non-existent and since the citrus overpowers the roast for the most part, this is an easier drinking Black IPA when compared to most on the market.

Permutation #26 was one of, if not the, best Black IPA's I have ever had. It's hard to find a Black IPA that can maximize both the roast and the juicy hops, but this one packed in mounds of flavor to each side. The citrus side had a bigger influence which led to higher drinkability. At the same time, it did not completely obliterate the roasty side, which was still allowed to shine. I hope they bring this one back, and in cans, because this is a superb Black IPA.