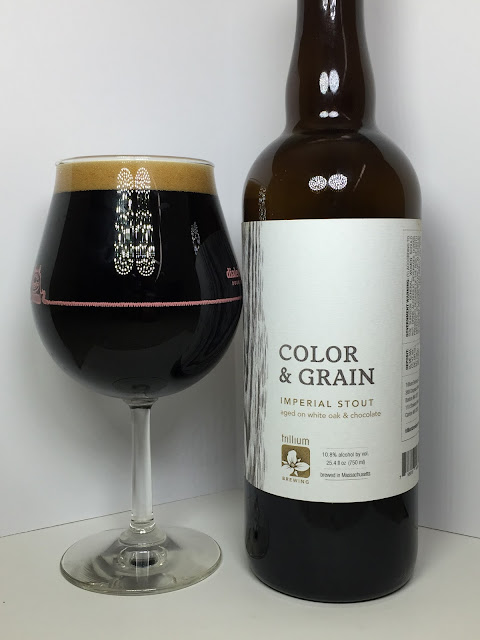 "We drew our inspiration from wood for this year's anniversary beer, its natural beauty as well as its building and lasting strength, provides layers in the depth of character in a concentric annual growth cycle. Color & Grain Imperial Stout Aged on Oak & Chocolate serves as an apt representation of our continued growth at our five year milestone."

Pours out pitch black with just a faint hue of ruby red on the edges. It poured to a finger of tan head with spots of dark brown.

Wow, now that's a decadent aroma! It smells like liquid Whoppers and I definitely agree with the malted milk balls description. The chocolate is not subtle by any stretch of the imagination as it is incredibly rich and very reminiscent of Hersehy's syrup and is even fluffy like a 3 Musketeer's Bar. At the same time, the oak is just as absurdly huge with a big smoke component and lots of char. Load a pipe up with tobacco and chocolate and that's what you get from the nose. More dessert-like notes of vanilla and even some fresh coffee just add to the goodness. Can I keep going? How about some cocoa powder and even some deep down dark fruits? It's one of the best smelling beers in recent memory.

The taste gives off new flavors that weren't present on the aroma, and that is quite the feat. Huge amounts of black licorice and cherries start things off on the right foot, but now there's also a bitter, dark chocolate to add to the mix. The initial impression is a liquefied cherry cordial, and that's something your lover deserves on Valentine's Day. The star of the show is chocolate, chocolate, chocolate. Randy and Mandy would be proud (two points for that reference). The Hershey syrup taste and feel is still here in full force and it just so incredibly rich like a well-made mousse. The barrel is kicking in flavors of tobacco, char, and wood. I'm getting some subtle graham cracker and toasted coconut to add to the complexity. Want more? Notes of caramel, toffee, and vanilla make for even more of a dessert beer than this already was and then there's a solid roasted malt flavor with some dark roast coffee. A minor nutty flavor also comes in as this warms and gives off a peanut butter vibe and then there's some subtle maple too. The finish has hints of piney hop bitterness. This is a mind bottling experience.

Mouthfeel is thick, viscous, and coats every inch of my mouth on each sip. What's surprising is that this isn't cloying at all and that 10.8% is shockingly well-hidden. It's a sipper for sure thanks to it's abv and amount of flavor, but it is worth the long journey.

Would you classify this as a Chocolate Stout, or a stout with chocolate? I'll let the style fanatics argue that, but what I do know is that this is not just an elite dessert beer, but an elite above elite Imperial Stout. This is as complex as an oak-aged stout can get, and for such a decadent beer, it isn't too sweet or cloying. The flavors are in near perfect balance. I thought the chocolate would be a subtle addition, but it turned out to be the biggest component of the entire experience. When you take the Imperial Chocolate Stout and then add in oak-aging, the additional flavors imparted by the barrel turn it into an overload for the senses.