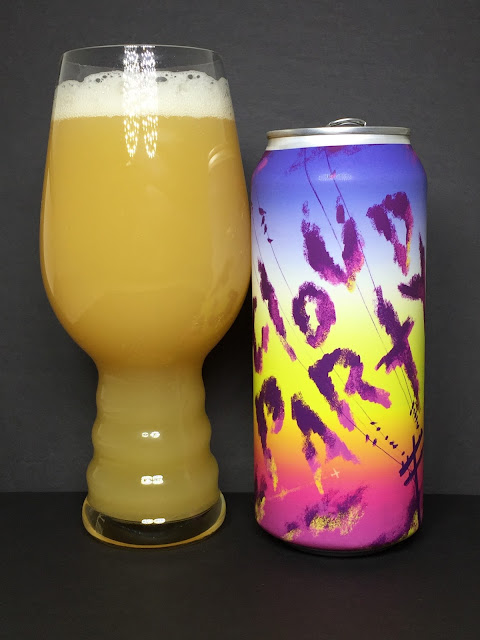 "Cloud Party is a hazy double IPA with huge citrus, papaya, and melon driven aromas. We used Simpsons Golden Promise, unmalted wheat, and oats to soften the palate for a nice round mouthfeel. Citra and Galaxy hops were used at about 4.5 lbs per bbl to impart big orange julius, tropical fruit, grapefruit, and and melon flavors. Enjoy!"

Pours out a light orange color with a murky body and a little over a finger of white head.

The aroma has a nice bouquet of orange rind and lemon along with subtle dank qualities and a creamy, orange sherbet hidden deep down.

The taste produces tart acidity from the citrus, but there's enough of a orange or grapefruit juice to keep it at bay. Citra appears to be the dominating hop as the taste is bookended by pulpy orange juice and orange zest. So what's the cream filling in this cookie, you ask? Well, an appetizing dank character with solid hop bitterness is the monkey in the middle and there's even a solid presence of doughy malts to shake things up. Additionally, a strong lemon zest flavor makes this mighty DIPA refreshing at times. The back end finishes with some more bitter hop oils that stick around after each sip.

Mouthfeel is standard for the style, but does lean towards the lighter (but not watery) side. Alcohol is hidden, and as I said before, the refreshing nature makes drinkability a breeze.

Cloud Party had a lighter feel than most Double IPAs I've had, but it still packed in tons of flavor and had high drinkability. Citra was the star here, bit there was enough room left for the Galaxy hops to lend subtle dankness to the citrus party. Refreshing, drinkable, and tasty. I'll gladly trade for more in the future.