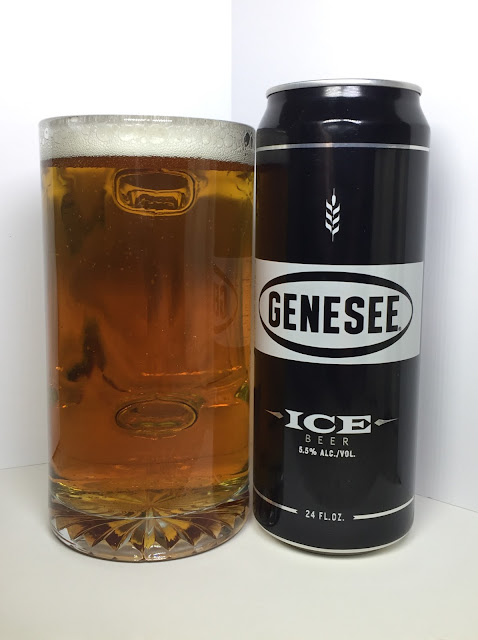 "When you're looking for a rich, full-flavored beer, Genesee Ice is the perfect beer for you. Our brewmasters begin with only the purest natural ingredients. Then, ice crystals form in the beer during its aging process before it's filtered for the rich flavor Genesee Ice is known for."

Pours out gold in color with a transparent body. It poured to a massive, soapy head that I had to let relax and then pour again.

Smells a lot like wet hay and grain. It's a typical macro lager aroma, but not offensive to my nostrils.

The taste has an initial caramel sweetness. but not sugary or too robust. There's no bitterness or malt presence, though I didn't have high expectations coming into this, but hey, a girl can dream. I don't know what adjunct they used, but it has the sweetness of corn on each swig, though I can't really put my finger on it. This isn't offensive to my palate until the finish (especially as this sits out longer and warms up) where I'm getting a noticeable metallic flavor and some skunky grains.

Mouthfeel is relatively calm with carbonation not being as big as I thought it would be. The body itself is coming in thin with watery moments, but it finishes clean with no aftertaste. Aside from some off flavors at the end, this isn't challenging to drink.

Genesee Ice was your typical macro beer and nothing more or less. I can't sit here and talk too much shit since the beer didn't give me any ammunition to do so. Mild skunky flavor at the end is the best I cam come up with, but in the end, this went down easily and would be a solid macro choice with mild sweetness if that's your thing.