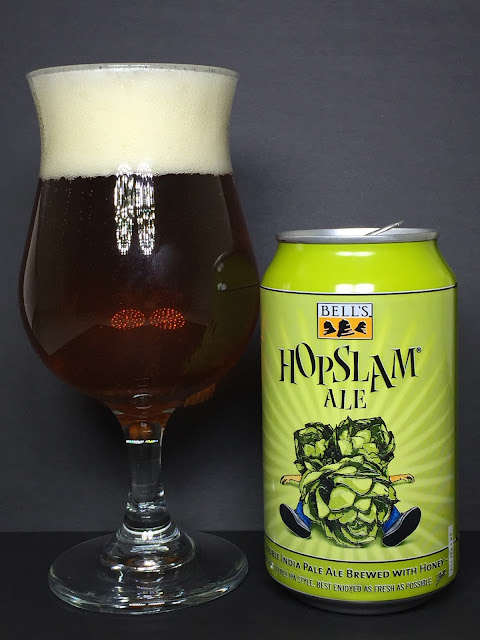 "Starting with six different hop varietals added to the brew kettle & culminating with a massive dry-hop addition of Simcoe hops, Bell's Hopslam Ale possesses the most complex hopping schedule in the Bell's repertoire.

Selected specifically because of their aromatic qualities, these Pacific Northwest varieties contribute a pungent blend of grapefruit, stone fruit and floral notes. A generous malt bill and a solid dollop of honey provide just enough body to keep the balance in check, resulting in a remarkably drinkable rendition of the Double India Pale Ale style."


Pours out a darker shade of orange bordering on copper with a transparent body and two fingers of frothy white head that stuck around forever.

Sweet citrus of tangerines and acidic grapefruit come forth on the taste which is reminiscent of classic West Coast IPAs. A little less pine resin here and more of a straight up pine tree taste. Is the sweetness attributed to the one of many fruity hops they used, or is it the honey that is responsible? Honey might account for that sweetness, but it has more of a caramel or toffee taste (in a good way). This does pack a bitter punch, but it isn't as intense as I thought it would as the hops are providing more sweet citrus rather than dank bitterness. Still, the bitter character is a nice exclamation point on each sip and the overall finish.

The body has a medium feel and is surprising smooth and almost too mild for its own good. I won't go as far as to call it "clean", but I was pleased to see that my palate wasn't destroyed by the hops. ABV gives off subtle warmth, but no real alcohol sting.

Does Hopslam live up to its reputation? I can't definitively make that call. If this was 2011, then this would have been ahead of its time since it is a hop-loaded, 10% DIPA that has remarkable drinkability and flavor. The IPA scene is now geared towards the hazy, juice bomb, New England IPAs, but being able to have a DIPA like this kind of brings you back down to earth and reminds you of the ones that paved the way for drinkable DIPAs. That being said, judging the beer on its own merits, Hopslam masked its 10% abv beautifully and had great hop dankness with sweet citrus and a lot of pine. It's complex and drinkable, but also worthy of savoring over the course of an hour. If this was available locally, it would be worth seeking out every Winter.