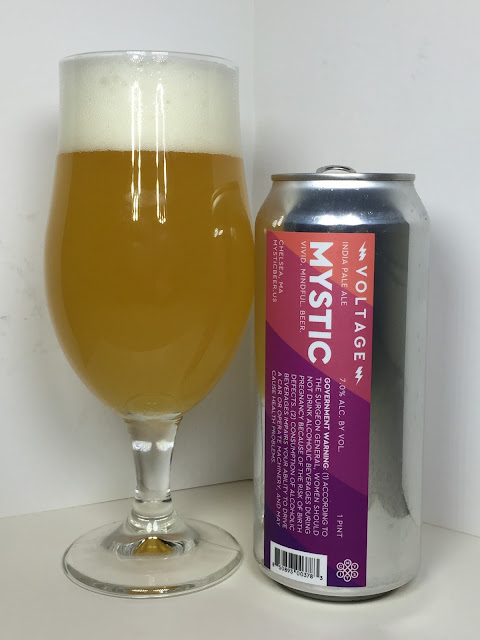 "Voltage is the simple answer to the everyday question, "What beer should I have?" Strong aromas of orange and guava translate in flavor. Drink it from the can, pour into a glass, or trade it with a friend. Just be sure to save one for yourself."

Pours out a pale yellow color with a hazy body and two fingers of white head.

Orange rind and lemon zest are the biggest aromas which are light, crisp, and refreshing. Small touches of flowers and pine needles are sprinkled throughout, but it's also herbal and minty at the same time.

The taste yields more bitterness than the aroma and it sure is appetizing. More of that orange is back, but it has transformed into a sweeter clementine flavor and there's some tart, acidic grapefruit following close behind. Some powdery malts come through as it warms with maybe some wheat for good measure. I get more herbaceous notes on the back half, especially more of that mint and even green tea. A biting (even scathing) bitterness is the story in the back, but that's meant in a good way. I can sense that immediately after the bitter flavor is done, it is concluded by a small burst of oranges. As an added twist, the aftertaste produces some lime.

Mouthfeel is full with good carbonation. As I mentioned earlier, this has refreshing qualities and they make drinkability high. Lingering flavors of bitter hops and lemon stick around after each sip. I will say this is noticeably dry, but not offensively so.

Voltage succeeds as a highly drinkable and flavorful IPA. It hits up several hop characteristics such as pine, herbal, floral, and citrus and does so without having the final product be a traffic jam of flavors. It's complex, tasty, and drinkable. What's not to like?