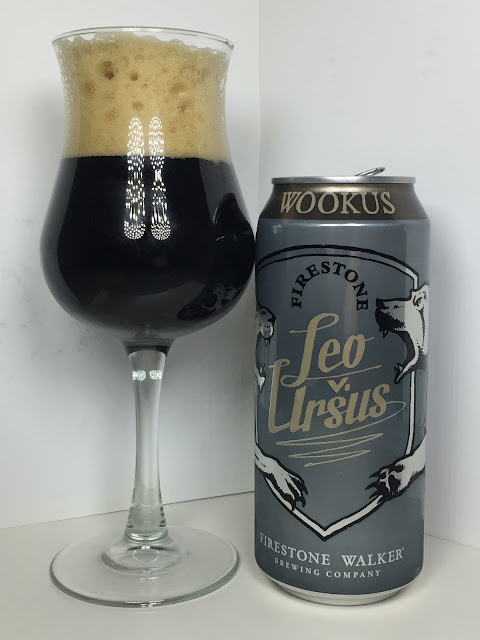 "Once thought to be extinct, the Wookey family comes roaring back with its wooliest progeny yet: an imperial black rye IPA that is wickedly hoppy, righteously spicy and fearsome in flavor. While exhibiting DNA from its Wookey Jack ancestry, Wookus offers next-generation attitude with amplified hop aromatics and a bit of rebellious dankness. The result is a beer that blends the familiar with the ferocious.  Right out of Firestone Walker mythology and into your glass—behold the beast that we call Wookus."

Looks black in appearance, but when you shine a light through it, it is actually the darkest shade of ruby red. The pour produced over three fingers of frothy, almond-colored head.

A roasted malt and black licorice presence are immediately noticeable on the aroma. Equal contribution from some fruity hops with orange peel add balance as does a little bit of pine.

The first thing I pick up is an abundance of rye and just a general spice cabinet of flavors. This Black IPA is staying grounded in the Black more than the IPA aspect. Dark malts and coffee grounds create a thud of bitterness, but the bitter bite is also attributed to some dank hop flavors. Additionally, there's a multi-grain bread malt taste which adds rustic qualities and keeps things relatively dry. The back end produces some citrus, but goes back to more roasty notes on the aftertaste.

Mouthfeel is full and has moments of creaminess. Some of those licorice and roasty notes stick around after each sip and the abv is well-hidden.

The resurgence of this Firestone Walker Black IPA was a nice trip down memory lane for me. A really good Black IPA is hard to come by, so the fact that this is doing a comeback tour is a treat. This Black IPA leans on roast more than hops, but that's they way I like my Black IPAs. That being said, hoppy characteristics are still to be had and their bitterness compliments the darker, bitter notes from the darker side.