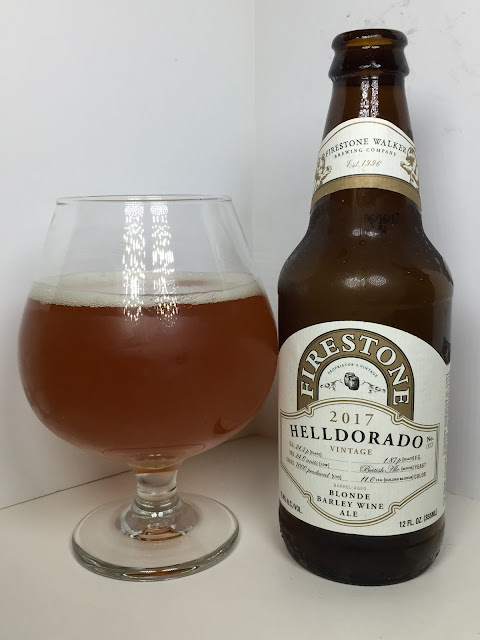 "Part of the adventure of aging beer in retired spirits barrels is the synergistic interaction of different malt flavors with the oak and spirit flavors from the barrel. Darker beers like stouts and darker barley wines have typically been the favored candidates for barrel-aging, due to their deeper caramel and roasted flavors. Helldorado breaks that mold with a deep golden color from being brewed solely with English and American pale malts. The bready, honeyed flavors of pale malts pull out rich wildflower honey, vanilla and coconut notes from the oak, creating an overall flavor evocative of bourbon-glazed graham crackers that stands as singularly unique in our Vintage lineup. Helldorado may be lighter in color but it is a full-bodied and densely concentrated sipper at 12.8% ABV."

Pours out a dark honey color with a half a finger of white head.

Now, I have actually had this beer before...

VOICE IN MY HEAD: Stop bragging.

...and I remember it being very hot out of the gate both in terms of aroma and taste. Well, here we are with the 2017 vintage and it is familiar territory. Ok, it's not stinging the nostrils, but a lot of booze is prevalent on the aroma. It's almost like bourbon-soaked honey or even a buttery Chardonnay with a big oak and citrus influence.

The taste doesn't have nearly as much booze (actually, hardly any), but it is unexpectedly sweet. Lots of toffee and caramel notes run wild like Hulkamnia while still retaining a lot of bourbon and honey from the aroma. Are Wheatwines just blonde Barleywines? Because I am calling this a Wheatwine since it meets the criteria, so if someone wants educate me then please let me know. I have no idea why, but I'm picking up coffee and even some chocolate. Maybe it's the char from the barrel, but I am caught off guard in a good way. The barrel continues to show its influence with a hefty dose of vanilla and even some toasted coconut. The back end continues with the bourbon and even adds some dark fruits. It's very complex.

Mouthfeel is pretty syrupy, but the carbonation shuffles it along nicely. Again, hardly any booze and no burning sensations. It tends to be a bit sticky on the palate, but so is life.

Helldorado was a significantly better experience than my last interaction. The taste was a bouquet of barrel character that had no clear end to its complexity. It shockingly worked as a dessert beer while still flexing it's big barleywine muscles. What a pleasant surprise.