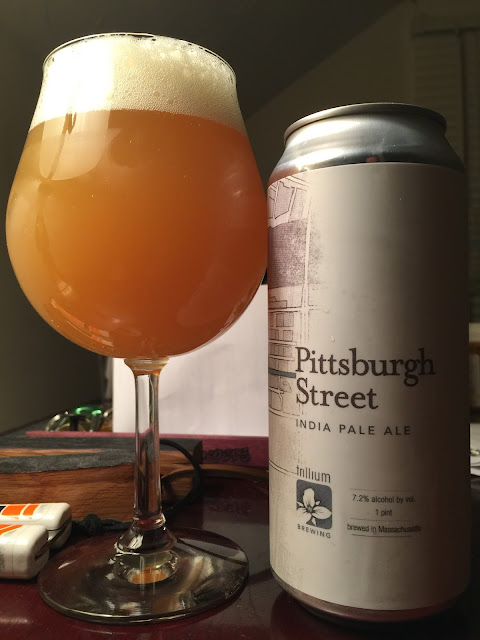 The signature hop in Pittsburgh is Enigma which drives papaya, cantaloupe, and floral aromas on the nose and are followed by a crisp palate featuring flavors of pineapple and zesty citrus."

Pours dark yellow in color with a hazy body and two fingers of frothy, white head.

I think I'd best describe this as a flower bomb. Lots of floral notes and beeswax are coming through for me as is a lot of orange rind, tart/acidic grapefruit, and some white wine.

There is a ton of juicy pineapple on the taste. It's funny because the juicier notes took a back seat to the flowers on the aroma, but the taste is telling a different story. The grapefruit from the aroma is 10x more powerful here as are white grapes and white wine. If I didn't know it was Enigma hops, then I would have easily also said Nelson. Herbaceous mint and green tea come out of nowhere as does some black pepper for a small spicy kick. The flowers also didn't go far and they give off an essence of potpourri. Berry tartness with subtle lemon zest throw their hats into the ring to finish things off.

Mouthfeel is medium with good carbonation. Some of that tartness sticks around after each sip which causes a minor lip-smacking sensation. The alcohol is hidden from view and some of the zestier flavors make drinkability high.

Pittsburgh Street was one of the best uses of Enigma hops that I have ever experienced. This hop variety runs the gamut of flavors which makes for a complex IPA.I was pleasantly surprised at how the aroma gushed from the can and at how the flavors were equally as strong on the taste. It's one of the better from the "Street" series from Trillium.