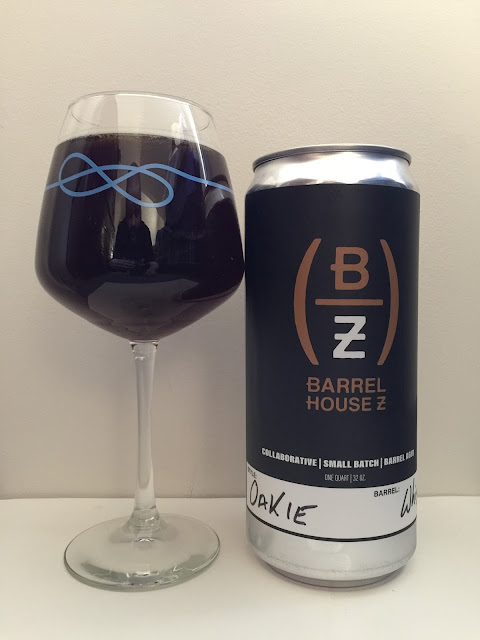 "A big, warm whiskey hug of a beer from brewer Glen O'Connor. Notes of caramel, butterscotch, toffee, oak,  and vanilla. Our biggest ABV to date"

Whiskey, butterscotch, and wood just burst out of the glass and into my nostrils. The aroma is sugary sweet with tons of caramel and toffee and it plays off the whiskey quite well. A toasted bread and toasted coconut bring more of the barrel to life. Very complex nose.

The taste is calmer than I expected in the sense that this isn't a big booze nuke, but rather a smooth and flavorful experience.

The taste follows the nose almost step for step. Lots of rich butterscotch and caramel run rampant with even a bit of iced tea and genuine hop flavor. The whiskey has been smoothed out in the two weeks I kept this in fridge and there's no heat to this, but what's left is a refined alcohol taste with lots of warming. Lots of oak is present as is even some char and tobacco from the barrel which contributes a kick of smoke. A strong malt presence is felt throughout and hidden way in the back is the smallest bit of vanilla.

Mouthfeel is full with a slightly syrupy body. The carbonation is surprisingly good which actually helps move the thick body along the palate. This one is obviously a sipper for these cold nights as the 14/7% would indicate.

Oakie was a thick, robust, flavorful Wheatwine. Make no mistake, this is a monster of a beer that needs to be handled with caution. Those who dare to tread will find a tasty blend of whiskey barrel and dessert-like butterscotch.