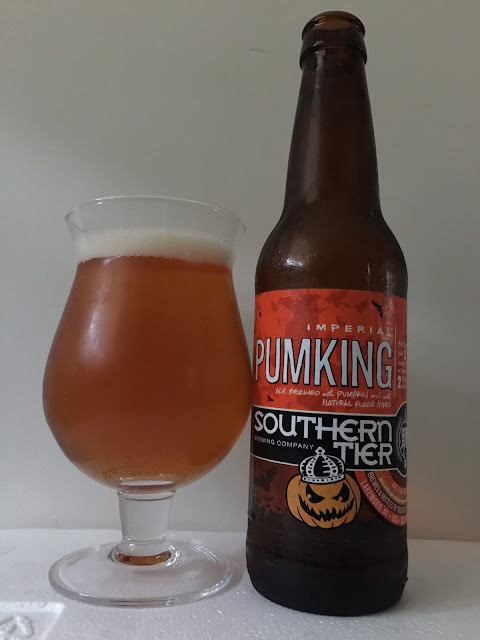 "Pumking is an ode to Púca, a creature of Celtic folklore, who is both feared and respected by those who believe in it. Púca is said to waylay travelers throughout the night, tossing them on its back, and providing them the ride of their lives, from which they return forever changed. Brewed in the spirit of All Hallows Eve, a time of the year when spirits can make contact with the physical world and when magic is most potent. Pour Pumking into a goblet and allow it’s alluring spirit to overflow. As spicy aromas present themselves, let it’s deep copper color entrance you as your journey into this mystical brew has just begun. As the first drops touch your tongue a magical spell will bewitch your taste buds making it difficult to escape the Pumking."

So, this might be my first attempt at making amends for a prior review. I first reviewed Pumking back in 2014 and to say the review was facetious would be an understatement. Maybe I was going purely for entertainment value rather than constructive criticism, but looking back, it was a bad review. I put emotion before beer and it was the wrong move. So, I am here today to do a rare re-review in order to right my wrongs.

Pours a transparent, rusty orange with a finger of white head.

The aroma has a distinct graham cracker and pie crust smell. Subtle notes of vanilla and cinnamon come through nicely as does a hint of squash and pumpkin.

Compared to other pumpkin ales, this one is one of the better examples suited for dessert as the pumpkin pie flavor profile is well represented.

Liquid pumpkin pie is the best way to describe the taste. That graham cracker crust that was so influential on the nose is just as big on the palate. Your typical pumpkin ale flavors of cinnamon and nutmeg are all here, but they are more robust than other examples. A yam and squash vegetal flavor brings in the pumpkin aspect of this beer and then there's some vanilla along with a spicy rum quality.

Mouthfeel is medium and smooth all around. You'd never guess this clocks in at almost 9% and thanks to the range of flavors, this is complex while retaining high drinkability.

My first review of this beer was clearly a lapse in judgment. If memory serves correctly (and it always does), then I think the first time I reviewed this it was the day I got the phone call that I had finished 2nd in the "Best Looking Man in the Universe" competition. Needless to say, I was a bit perturbed. Today, I give Pumking my stamp of approval as a great pumpkin ale.