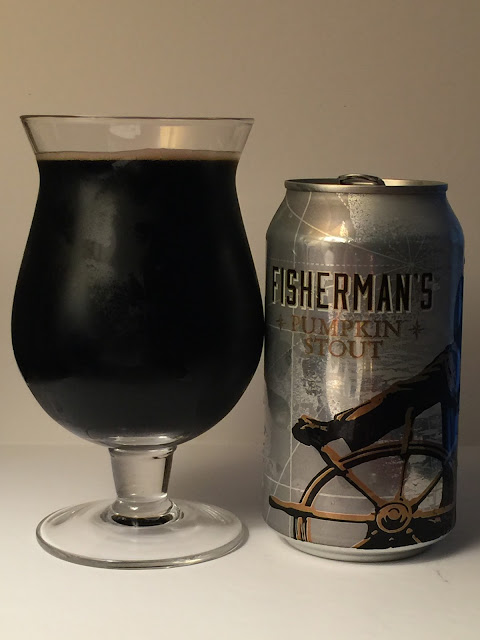 The beer sits absolutely pitch black in the glass with no hints of ruby red or brown anywhere. The pour produced less than a finger of off-white head.

A hot, massive load of nutmeg (don't Google that one at work) bursts from the glass first with cinnamon not far behind. The aroma is incredibly spice-forward and the pumpkin is pretty much lost in the background, but overall, the aroma is inviting.

The pumpkin shows up on the taste and it's actually what sticks around after each swallow. Like the aroma, the nutmeg is reaching superhuman levels of robustness. While the pumpkin has made an appearance on the taste, this is still very much all about the spices. The cinnamon is nowhere near as strong as it was on the aroma, but it is still well-represented on each sip. The base stout contributes a small amount of roasted malt flavor.

Mouthfeel is full, but it's not thick or viscous. However, for 7%, it feels spot on. Aftertastes of pumpkin and nutmeg makes it feel like Fall and no alcohol is to be found.

This was more of a nutmeg stout with pumpkin rather than the other way around. I do think the body was just full enough to make this work. Had it been a thinner, watered down stout, then I don't think it would have been enjoyable. It's overpowering on the spices, but I personally found it to work well.