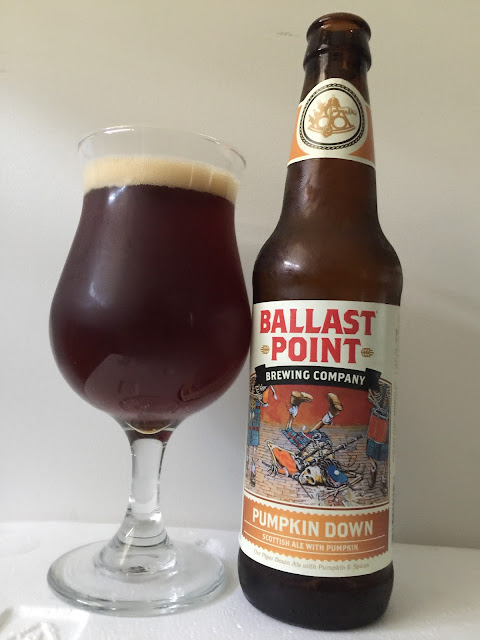 "A pumpkin ale that bucks the trend. Some might think we’re out of our gourd for making a pumpkin ale, but our Pumpkin Down is not like the others.  The caramel and toffee maltiness of our Piper Down Scottish ale is the perfect backdrop for a boatload of roasted pumpkin. Just before bottling, we add a subtle amount of spice to complement, but not overwhelm, the earthy flavor. It was a smash at the brewery, and we think you’ll agree."

Pours a mahogany red color with a finger of yellowish head.

I'm picking up sweet malty notes with a dash of subtle pumpkin spice on the aroma. A good amount of cinnamon and nutmeg seem to be pushing to the front of the line and the base scotch ale is getting lost.

The base beer comes through a bit better on the taste. The malts have a sweeter, caramel flavor, but nothing too in-your-face about it. Aside from that, there's no real trace of a Scotch Ale. More nutmeg and minimal pumpkin flavor are also to be found along with moments of squash, but they aren't too prominent. I'm getting some sort of oat or cereal flavor the more I drink, and actually, a bit of toffee does seem to come out as this continues to warm.

Mouthfeel is light-to-medium and relatively calm. No alcohol to be found and no bad aftertaste. It can feel thin at times, but isn't a watered-down beer by any means.

Pumpkin Down's Scotch Ale qualities were few and far between and the pumpkin aspect of this brew (slightly) outdid the base beer. In the Pumpkin Ale world, you will find examples with a lot more of that familiar fall flavor you are seeking out. I can't say it is a great blend of styles, but it isn't offensive to my palate either. It's an ok pumpkin beer, but you can find better.