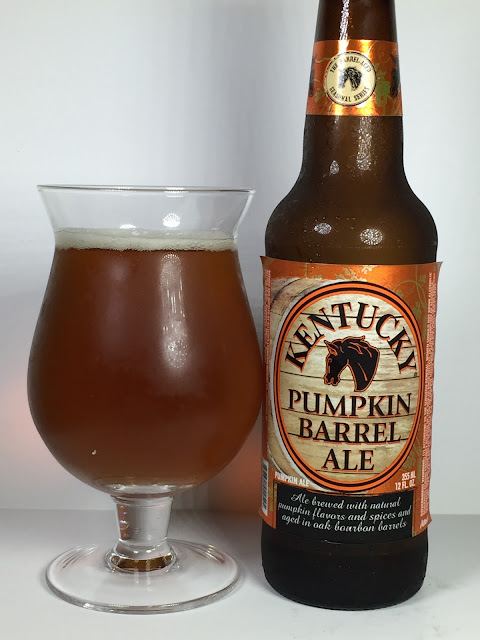 "As the ale is aged in fresh bourbon barrels, the sweetness of caramel and vanilla are imparted upon the brew and complement its spicier base. At 10 percent alcohol by volume (ABV), this robust, limited release seasonal makes for a flavorful sipping beer to slowly warm up with as the weather cools."

Pours rusty orange in color with a transparent body and it had a finger of off-white head.

Overall, the aroma quite bland. There's minuscule traces of cinnamon and nutmeg, but no barrel character. The pumpkin itself is also here, but again, very faint. It's not offensive to the nose, but it's rather plain.

Thankfully the flavors come out bigger on the taste. My first impression is the oak and char from the barrel with a smokey quality. This is more barrel "kissed" rather than being soaked in bourbon and the sweetness works well with that smoke. There's a little bit of residual booziness and alcohol on each sip, but it isn't a pure alcohol taste, so it is easy to tolerate. Spices of cinnamon and nutmeg are here, but like the aroma, they aren't major players, but at least they play a bigger part here. A mild potpourri and floral influence is also felt throughout, but in this case, it is the pumpkin and spices that just barely win out over those.

Mouthfeel is relatively calm. The body is a little thin, but not watered down. If I was blindfolded, there is no way in hell I would every say this was 10% friggin' percent. I am impressed and disappointed at the same time. I'm obviously impressed at how well it masks the abv (with just a touch of the aforementioned heat), but this had the makings of a massive, warming sipper. Instead, this actually went down in a hurry thanks to the light body and hidden alcohol. However, is that what this beer was going for? I don't think so.

Kentucky Pumpkin Ale had a chance to set itself apart from other pumpkin beers, but at the end of the day, this was a good, and not great offering. The standard pumpkin beer flavors are here to be seen for sure, but for a bourbon barrel aged beer, this needed to pop a lot more on the aroma, taste, and feel. Admittedly, this was shockingly easy to drink and I do think even the casual drinker who looks forward to pumpkin beers every season will like this and be bale to gulp it down.