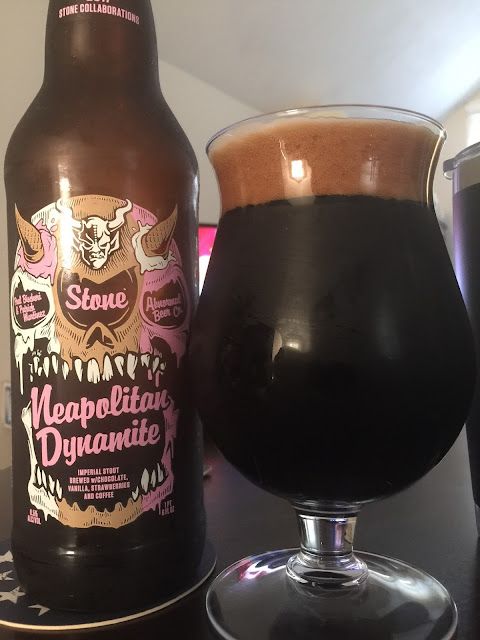 "The beer from this year’s winners of Stone Brewing Co.’s annual Homebrew Competition & AHA Rally: As with past winners, the name is a mouthful: Paul Bischeri & Patrick Martinez/Abnormal Beer Co./Stone Neapolitan Dynamite. The beer itself is an 8.5 percent ABV imperial stout brewed with chocolate, vanilla, strawberries and coffee. It comes from Paul Bischeri and Patrick Martinez, who won last year’s competition. As part of their victory, the winners get to brew the beer at Stone’s facility and then it gets bottled and released. In addition to Bischeri and Martinez, Stone enlisted the help of Derek Gallanosa from Abnormal Beer Co. in San Diego to “bring this ice cream sundae of a beer to life in full scale."

Some nice roasted coffee up front, but everything else is either lacking or incredibly subtle. I do detect a the ghosts of vanilla and strawberry past, but chocolate is a little harder to come by. It's more of the chocolate malt notes you get with a standard Imperial Stout rather than any added chocolate as an adjunct.

The taste is like a bad report card from elementary school: The flavors participate in class, but they do not follow directions. Everything is here, but it doesn't wow the palate.

I pick up the strawberry first and it leaves a fruity extract coating over everything. Lots of bitter, iced coffee seems to try and dominate and it has a creamy component to it, which I attribute to the vanilla. I will say that there is a fluffy milk chocolate taste that I am really enjoying and it is almost the beers saving grace. Imagine being a kid blowing bubbles in your chocolate milk and you will understand. Hidden deep in the back is almost a smoky flavor, which was unexpected, but welcome.

Mouthfeel is thick with no alcohol taste. Each sip leaves a sticky coating, but it isn't chewy.

While all the flavors were here for Neapolitan Dynamite, I just don't think they were big enough to push it over the edge. I give points for the thick, fluffy mouthfeel, but some of the flavors seemed too artificial to make it truly enjoyable. This was great in theory, but just missed on the execution.