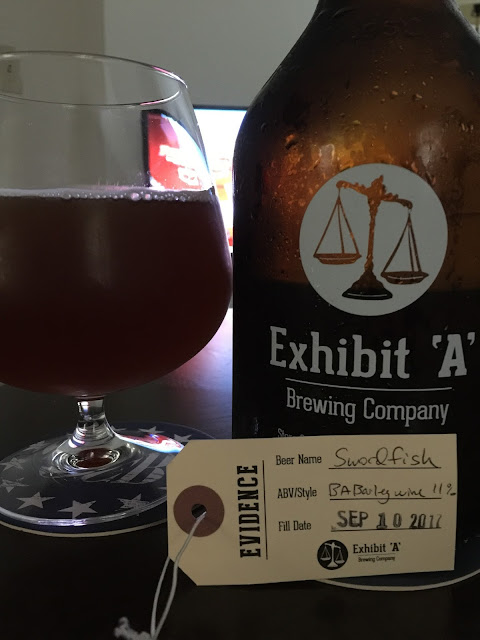 "We brewed a barleywine using just Maris Otter malt and some hops. We then aged it in Rye and Corn Whiskey barrels from Breuckelen Distilling to create this sweet and warming beverage."

Pours a rusty orange, iced tea color with almost no head, but what was there was almond in color.

The aroma is full of vanilla, caramel, and toffee. I mean, wow, this one blows my hair back. A refined alcohol smell and big blasts of whiskey and oak make me smile. Plums, raisins, and other dark fruits add even more to the complexity and then there's a piney hop element added to it. Great stuff.

Considering the large alcohol and barrel character on the nose, I was bracing for a potential booze bomb, but this is an incredibly smooth experience.

I can't get over how much vanilla I am getting from this beer. I know the barrel adds a touch of it, but damn, the vanilla in this is almost making this a dessert beer. Perhaps it's the sweetness from the flavors of caramel and toffee that might be making me think this way, but in any case, this one has me drooling. In addition to all of that, flavors of the rye whiskey and oak run rampant and I pick up a nice char and tobacco flavor from the barrels. Like the aroma, dark fruits come out to play as the raisins and plums make a fashionably late appearance to this party in my mouth. Like the aroma, this has a hoppy influence of pine and even some dank flavors.

Mouthfeel is full and pretty much perfect. It's a big beer at 11% and the alcohol has a refined taste and is never burning. Sip on this one for hours and revel in it's beauty.

Swordfish might also be a movie known for Halle Berry's nudity, but I can honestly say that I get just as much satisfaction out of this beer as I do seeing her expose herself on film. Saying this beer is complex is an understatement. Too many flavors to count on one hand and it drinks so smooth. For those in the area, I believe it is still on tap, so you need to hurry down to the brewery while you can. Exhibit 'A' has delivered a world class offering that you need to get in on.