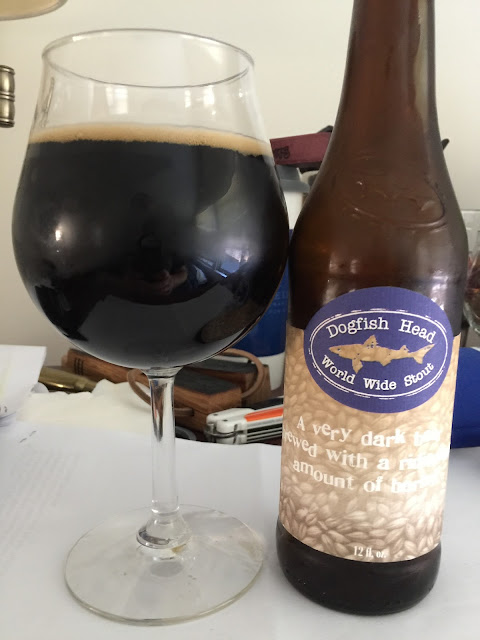 "World Wide Stout is one of the world’s strongest dark beers. It is brewed using six different yeast strains over seven months and then aged for half a year. Dark, rich, roasty, and complex, World Wide Stout has more in common with a fine port than a can of cheap, mass-marketed beer."

Pours pitch black with just the tiniest shade of dark brown on the edges. Pouring aggressively still yielded less than half a finger of head, which was tan in color.

The aroma is bursting with black licorice and anise with red grapes and other vinous notes. Roasted malts and some mild booze cap things off.

Reading a lot about this beer prior to my review, I was expecting a bottle of pure rubbing alcohol and endless heat. While the booze plays a prominent role, it is not the only characteristic as there is plenty of complexity to be had.

The taste starts out with some bitter dark chocolate, but that dessert-like taste disappears in a flash as it is washed away by the aforementioned vinous notes and red grape. Dark fruit influences of plums and raisins are accompanied by that boozy heat. Alcohol plays a big role, but it doesn't mask any of the other flavors. The booze lends noticeable sweetness to the flavor profile and as I sip on this as it warms, it really is more of a spirit than a stout. If the alcohol masks anything, it is any roasted notes that were once in here as traditional stout qualities are hard to come by.

Mouthfeel is full, but doesn't have that viscous or thick body associated with stouts this massive. The alcohol taste is refined, so it doesn't hurt the experience. Surprisingly, when I held it in my mouth, there was a decent amount of carbonation bubbles dancing around. Clocking in at nearly 20% abv, this is one you savor over the course of an hour or two.

World Wide Stout had a reputation as a gargantuan beer and to that end it succeeded. While obviously not the most user-friendly brew in terms of drinkability, the fact of the matter is that it is easy to appreciate the final product and the complexities that come with it. I think with age the alcohol will die down and allow the other flavors to pop, but with a current vintage such as this, I still found it enjoyable experience with a big, boozy feel and plethora of dark fruits.