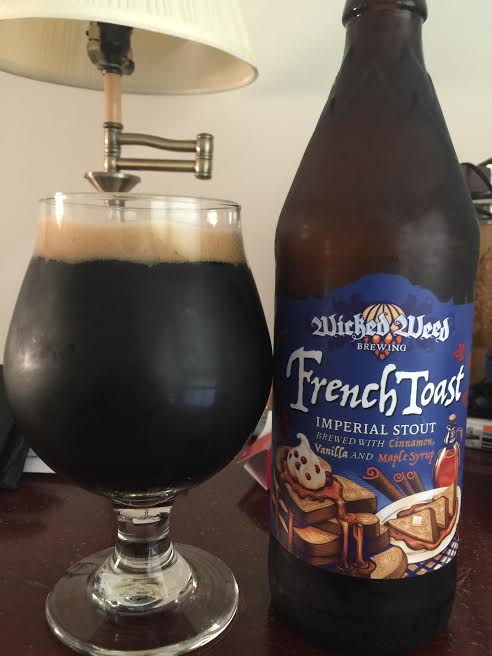 "Creative minds are everywhere at Wicked Weed. This beer is the result of our first employee beer idea contest. Alanna and Holly came up with this idea and helped brew the beer. Brewed to embody every aspect of French Toast, we used maple syrup, cinnamon, vanilla and real French Toast to create a beer suitable for the breakfast or dinner table."

Pours like a typical stout: Black body with ruby red edges and a finger of khaki-colored head.

I know it's not made with coffee, but I get a lot of roasted notes on the aroma. Then there's a sugary sweetness I attribute to the maple syrup. The vanilla comes in the form of melted marshmallow reminiscent of a dollop of whipped cream on top of a hot waffle. Cinnamon spice emerges more and more as the beer warms. Yep, every promised flavor is here and accounted for.

You're a child lying in bed on a Saturday morning and you don't want to get up. Suddenly, your nostrils are filled with the savory aromas of a home-cooked breakfast. You run downstairs and see a giant plate of pancakes covered in warm maple syrup with cinnamon-sugar sprinkled on top. You sit down, grab a fork, and dig in....then you start to wonder what you want to do with your life. Maybe you want to be an optometrist, or an astronaut, or a professional wrestler. Then as life goes on, you slowly realize you're too lazy to meet your potential and you have achieved your own self-fulfilling prophecy of being an overweight beer blogger with bad cholesterol and high blood pressure. Looking back, you have an epiphany that these breakfasts were the best part of your life, and your only bottle of this is saving you from melting into a pile of sadness.

Breakfast stouts (does this qualify as one?) are great due to so many dessert-like flavors packed into one beer, and this is no exception. Letting the beer warm works wonders as a nice heaping helping of vanilla and cinnamon lead the charge. The base stout qualities of roasted coffee adds a nice pick-me-up as does a noticeable milk chocolate flavor. The cinnamon is more like cinnamon-sugar, which I love as an additional confectionery component which is similar to what you sprinkle on fried dough. Actually, the finish is really what is soaked in that cinnamon taste, but also more of the coffee notes come back, especially dark coffee grounds, or chocolate-covered coffee beans.

Mouthfeel is not as thick as I'd want for an Imperial Stout. It can be slightly thin, but not watered down. No alcohol to be found. The plethora of dessert and breakfast flavors make this one a joy to drink and would be stellar as a dessert beer...or breakfast beer...I won't tell if you won't.

French Toast delivers on its promises. A sugary, syrupy stout covered in cinnamon and vanilla, this one is delicious on all counts. My only complaint would be that I desired a thicker body to match the title of "Imperial Stout", but other than that, this was something I would buy again and again.