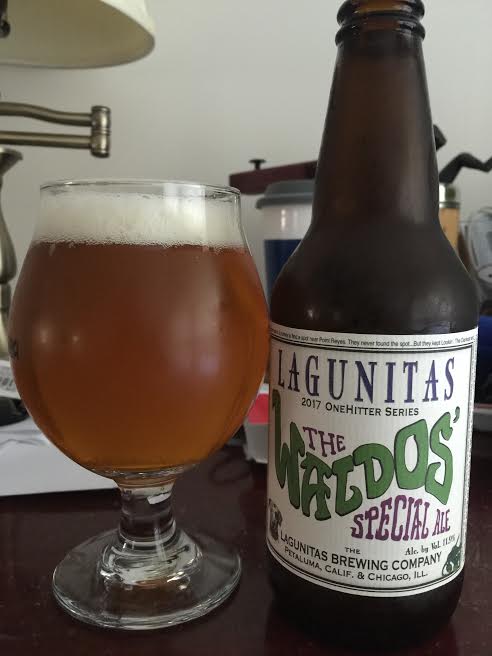 "In 1971, the Waldos met one afternoon at 4:20 in the front courtyard of their school near the statue of Louis Pasteur. They set out in a '66 Impala armed with a "treasure map" on a journey to find a secret garden near Point Reyes. They met there at the same time every day and continued their quest. They never found the secret garden....But they keep lookin'. The dankest and hoppiest beer ever brewed at Lagunitas was made with help of the Waldos for all treasure hunters."

Pours a dark, almost copper orange with a mostly transparent body, but has some haze. I got maybe a finger of white head.

It smells syrupy and resinous. Tons of familiar West Coast garlic and onion. I swear I'm getting apple juice, but spiked with black pepper and spices.

On the taste, I immediately pick up some candied orange and other tropical fruits. Not a juice nuke by any stretch of the imagination, but I'm glad to see it here after being absent on the aroma. It has a sweet candy taste kind of like sucking on a juicy...pink...Starburst (you thought I was going somewhere else with that, didn't you?). It's not all sweets and double entendres as a flood of pure dankness comes in and pretty much sticks to every surface of my mouth and is borderline unrelenting. I know the whole concept behind this beer is a celebration of puffing the magic dragon, but in addition to how dank this is, there is some sort of addictive property to this. The beer is so intense with each sip, I keep coming back for more just to see how much I can really take all at once. It's so weird. There' a noticeable alcohol warmth and taste, but it's not bad at all and is welcome in this case. It's boozy for sure, but again, not a big deal.

Mouthfeel is thick and syrupy just like a lot of double-digit abv IPA's. Like I said before, you pretty much need to scrape the hops and dankness off the back of your teeth after each sip. A big, boozy body makes this one a sip-by-sip affair.

Waldo's Special Ale was a different experience for sure. As a TIPA, this represented the big-bodied, alcohol-warming, syrupy side of the coin, but it was still fun to drink. Yeah, that's exactly how I'd describe this. This was fun to drink. Would I suggest killing your six-pack on one night? Are you fucking crazy? One 12oz bottle is the ideal serving and fans of this massive Triple IPA style are going to be thoroughly pleased.