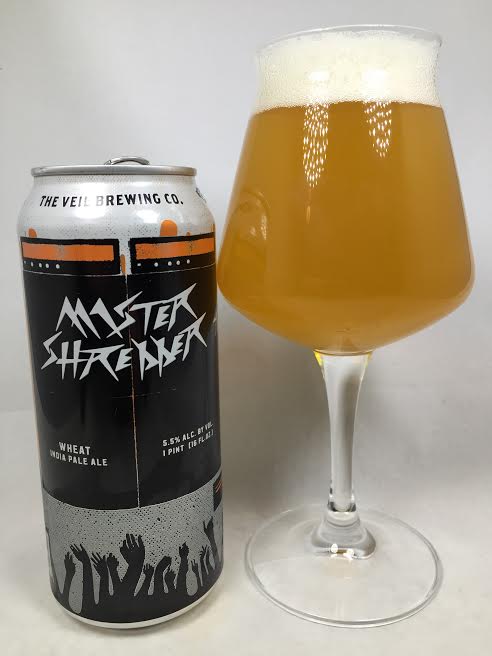 No commercial description for this one. The Veil Brewing out of Virginia just opened its doors in April 2016. Head Brewer Matt Tarpey was a former assistant brewer at Hill Farmstead prior to joining The Veil, so immediately, you know the place is legit. I scored some of The Veil beers in a trade and what better beer to look at first than their flaghship IPA: Master Shredder.

The aroma has almost a dank, wet hop smell to it with a good amount of grain and wheat. I also get tangerine and grapefruit peel which adds a fruity kick.

The taste is very refreshing. An abundance of non-acidic grapefruit and wheat tale control over everything else. Some notes of oranges, pineapple, and mango make this juicy, but not overly so. It isn't until near the back that a tiny amount of bitterness pokes its head out, but this is by no means a hoppy adventure as the wheat, citrus, and tropical flavors make for a light, but flavorful experience. I mentioned a wet hop presence on the nose, and the same can be said for the finish as this shows (subtle) signs of sweet malts and a little bit of dankness. Some nice bready qualities are here too.

Mouthfeel is light, but not watery. At 5.5%, this isn't a true session beer, but the light body and low abv make this an easy crusher.

Master Shredder is an easy-drinking experience with a light, crisp body and fruity flavors. If Blue Moon was a stellar beer, then it would be this. It's a beer you can sip on slowly to enjoy its complexities, but I can see this being in my cooler at a BBQ during hot Summer months. The Veil's flagship IPA is a winner.