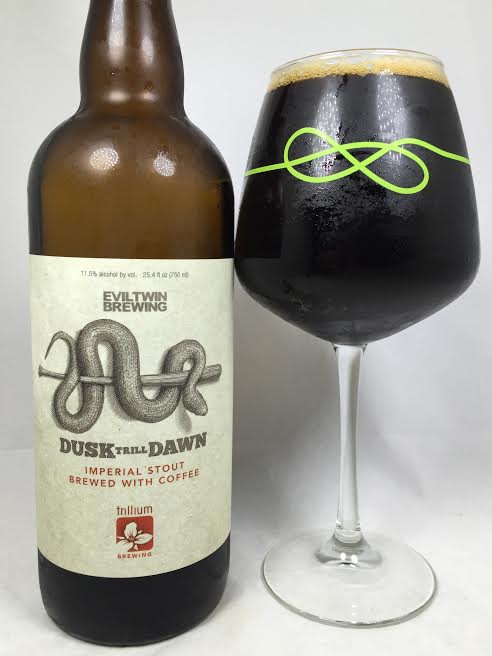 "Our latest collaboration with Evil Twin Brewing is a heavenly, coffee infused stout drawing inspiration from Even More Jesus & our own PM Dawn. Ascendence is inevitable with unique complexities provided by the use of experimental sugars and a small percentage of smoked malts. Bold aromas of freshly ground coffee beans, cherry jam, and vanilla extend to the palate with additional notes of intense milk chocolate, vanilla, and slight smoke. Dusk Trill Dawn is dry with a light mouthfeel and moderate bitterness."

Pours pitch black with light brown on the edges when held up to the light. The pour produced a finger of mocha-colored head.

Plenty of coffee (duh) on the aroma with some vanilla, dark chocolate, cocoa, and smoke. Lots of dark fruits too and roasted malts.

Coffee is obviously the star here, but it has more bitterness than I expected which surprises me since Trillium usually utilizes less bitter, cold-brewed coffee. Though the bitter bite could be attributed to the Columbus hops. Past the bitterness I get sweeter flavors of vanilla, fudge, and even some caramel. The dark fruits return from the nose with cherries and plums being most prominent. With each sip, the coffee is the lasting impression with a rich taste and feeling. I must say that when this was released, I had one bottle immediately and recall this being probably the most coffee-forward stout I'd ever had. As the months have passed, I feel like the coffee, while still the biggest presence, has begun to fade considerably.

Mouthfeel is thick and viscous like motor oil which perfectly embodies an 11.5% Imperial Stout. That abv though is nowhere to be found and I don't even get a warming sensation. Alcohol is truly hidden and the flavors and body are left to shine. Each trip into my mouth is left with a residual stick feeling (giggity).

Dusk Trill dawn is a great Imperial  Stout with it's thick mouthfeel and roasted characters throughout. The coffee surrounds your taste buds at every turn, but as I said before, the coffee still isn't as big as it once was. Given that it is still so big, you can only imagine what it used to be like. This beer provides more than just straight coffee with dark fruits and smoke, so complexity is big with this one. The alcohol is hidden a little too well, so sip slowly or else your head will spin.