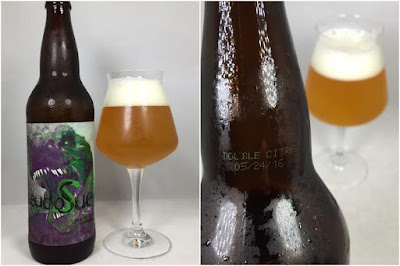 If you've been with me since way back in 2014 (first off, thank you), then let me put you in the Delorean and bring you on a trip. I reviewed Toppling Goliath's PseudoSue pale ale almost two years ago. At the time, it was a mega-hyped beer: an all citra-hopped pale ale that was receiving widespread acclaim. I thought it was ok (cue the boos... or "booze" in my case...*rimshot*). Then last year some controversy arose because PseudoSue was being contract brewed out of Florida. The head brewer Mike Saboe left amidst a terrible breakup worse than Zack and Kelly, but then they kissed and made up and Iowa fans did a Lebron/Cleveland 180 and immediately forgave Toppling Goliath for any wrongdoing. Now PseudoSue is available in cans, but have they done anything different to the beer to keep it interesting? Why yes they did!

Last month, Toppling Goliath gave fans blue balls with pictures of a *drumroll please* batch of bombers off the bottling line of...wait for it...Double Dry Hopped PseudoSue. This wasn't some contract brewed bullshit either. This was a 100%, Grade-A, made in Decorah, Iowa, Double Citra Dry Hopped bottle of liquid Viagra!

Naturally trade forums blew a metaphorical load and everyone had to have it. Luckily, I had acquired some heavily sought after Trillium beers and was in a position of power (*evil laugh*) to work some trade magic. So I struck some deals and landed a few bottles of this hype train and I am here to let yo know firsthand that this is without question...pretty good.

The aroma is rather mild for a DDH offering. Some orange rind lets you know there's a citrus presence even though it isn't overpowering. It's leaning towards the sweeter side with notes of sugar-sprinkled grapefruit and candied oranges. There's perhaps just a touch of bubblegum/juicy fruit flavors floating around in there too.

A bit more of a citus kick on the taste. It's still remains pretty sweet overall, but a bigger orange juice flavor plus those sweeter, sugary notes reminds me of a creamsicle or cream soda. Sticking with that theme, a dessert-like orange sherbet flavor is here too, but this also has just enough of a fresh mint hop flavor to balance it out. Even with all of the sweet flavors and good amount of hop bitterness, this does taste relatively clean with not a whole lot of it staying back and letting you savor.

Mouthfeel is where it should be for the style. It's full-bodied with no areas of thinning out. I mentioned how the flavors finished clean, but as that translates to the feel, it makes for no unpleasant lingering taste. Thanks to such a flavorful mix, this is going down easy and I would call it a refreshing experience overall.

How much does DDH PseudoSue improve on the base beer? On the positive end of the spectrum, the flavors are bigger, sweeter, and overall more vibrant. Everything bursts out of the glass on a bigger scale. As for calling this one of the best pale ales I've ever had...that is where I'd need to pump the brakes. Don't get me wrong, this is still full-flavored and delicious, but I wouldn't say it is near the top of the heap. If it was a local offering to me, then hell yes I'd go to my local store and grab a bomber when the Facebook page announced its arrival, but I wouldn't drive a few extra miles to get my hands on it. At the end of the day though, it packs tons of flavor and is superior to the standard PseudoSue in every way.