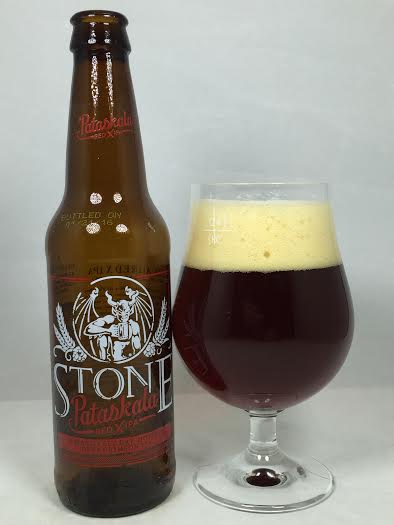 "Pat-ASK-ala? Pata-SKALA? Pa-TASK-a-la? While those in the know favor the third pronunciation, no matter how you say it, this is a unique red IPA. The beer was first brewed in September 2015 to support music and arts education programs in Pataskala, Ohio, where Stone co-founder Greg Koch grew up. People there loved it, so we added the beer to our seasonal lineup. The deep crimson hue is courtesy of a fairly new special German malt variety by BESTMALZ called Red X. Dry-hopped with Mosaic, Cascade and Amarillo hops, this beer is incredibly citrus-forward, rounded out with biscuit and toffee notes. We think you’ll find this red IPA to be quite deliciously satisfying, no matter how you choose to pronounce it."

The aroma has an interesting mix of grassy hops and toast or even Cheerios.

West Coast garlic and onion hops hit you up front first followed by a sweet caramel and toffee combination which levels out the hop intensity. As it heads towards the back, the malts come forward with almost a multi-grain bread or burnt toast flavor. It's almost like the aforementioned Cheerios taste, but it's soggy cereal: still good, but wet and grainy. As it warms a nice kick of pine and spruce add complexity. The aftertaste has no unpleasant lingering flavors, but it might be a tad too clean.

Mouthfeel is medium with less carbonation than I expected, but not flat. It's dry on the finish, but not a dessert in your mouth and has no alcohol presence.

The Red Ale isn't know for many (if any) examples that are considered world class load blowers, and Pataskala is no exception. That's not a knock against Stone, it's a criticism of the style itself. Still, this does have a bit more complexity than other examples as the hops weren't drowned out by the malts and the burnt toast added some light roast to a sweet caramel tone. At the end of the day, it's a slightly better Red Ale than most.