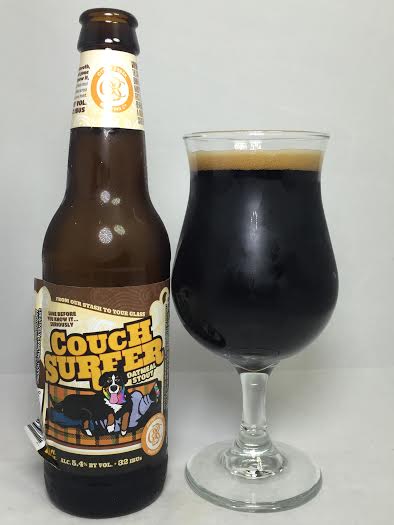 Another new addition to Otter Creek's lineup of year-round beers comes an oatmeal stout which is a slight departure from their other year-round offerings which are mostly IPA's or pale ales. I think it may be their first year-round stout, so hopefully it is worthy of being on the shelf 365 days a year.

Pours pitch black with ruby red on the edges. I got less than a finger of tan-colored head.

Sweet roasted malts on the aroma with some chocolate syrup and coffee. Very mocha-esque.

The taste is mostly dark roast coffee, but with hints of chocolate. It is a very sweet beer up front which transitions to those burnt or roasted notes near the middle. I also detect the faintest hint of cherry which adds a dash of darker fruits to compliment the sweet chocolate. The finish is noticeably bitter thanks in part to all of those dark, roasted notes, especially the burnt coffee grounds taste brought on by the malts.

Mouthfell is velvety smooth, and feels bigger than 5.40%. There's a small bit of carbonation, but overall it is flat, but silky.

Couch Surfer is a pretty standard oatmeal stout, but has just enough sweetness to distance itself from the majority of the pack. I liked the intense roasted characters combined with sugary chocolate. Again, it doesn't re-invent the style, but it's still a sweet-tasting, easy drinking beer.